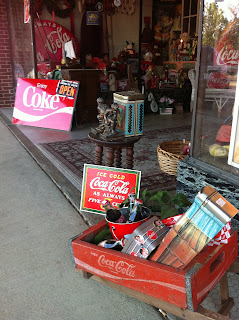 It doesn't take long for things to change, yet stay the same, at Second Hand Rose Antiques in Minden!  We were last there in mid-February but when we arrived today I was overwhelmed with all the new things to see.  Not to worry though - the shop is still packed with treasures at every turn.

Milly has apparently been busy buying and unpacking boxes since our last visit.  I was really surprised at all the new things to see.

I'm always out to spot the quirky or unusual things and so this tray of bottle stoppers and tops caught my eye: 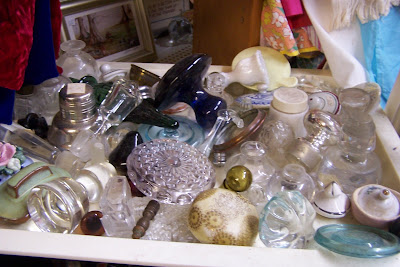 Over there to the right side about in the middle is a cool mercury glass one.

I thought this ceramic cat was rather cheerful: 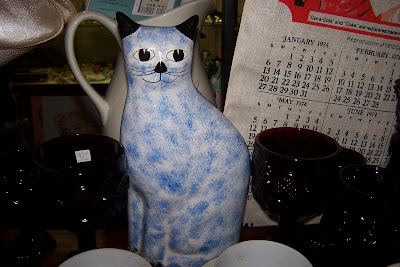 And speaking of cheerful cats: 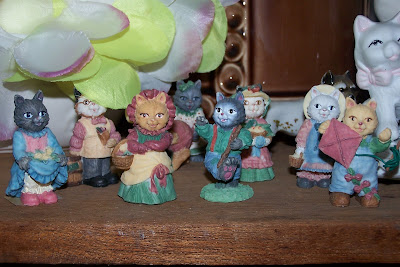 Not into cats?  How about some owls? 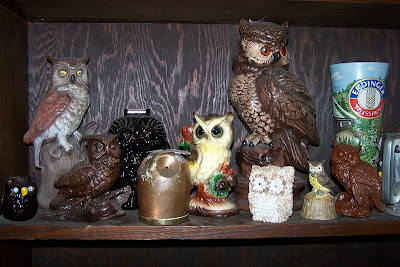 Dolls?  I noticed several porcelain dolls this time.  This one is pretty large: 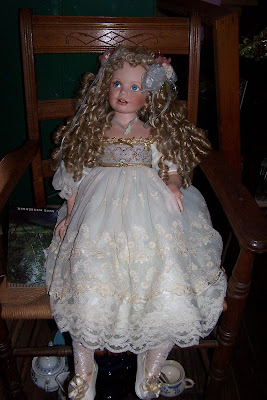 Two of these dolls are waiting for replacement arms: 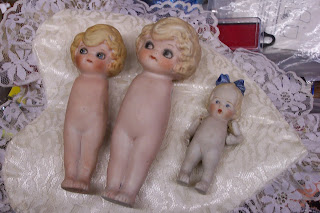 And while not designed for a doll, or doll sized, this wrought iron baby bed is currently holding a doll.  Milly says this bed is about a hundred years old: 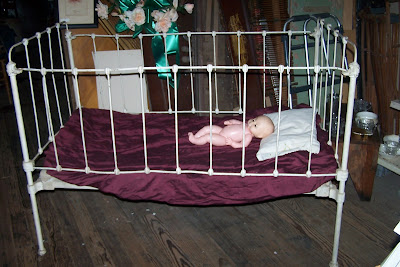 Here's a look in some of the jewelry cases: 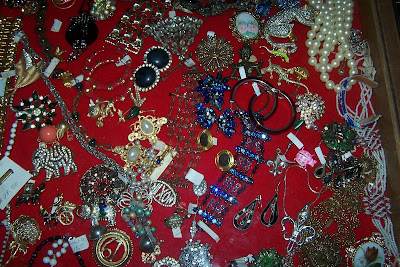 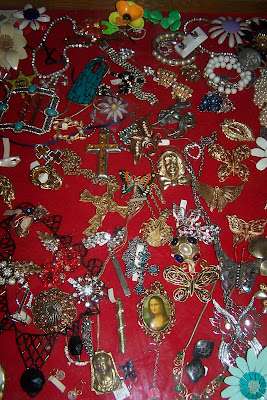 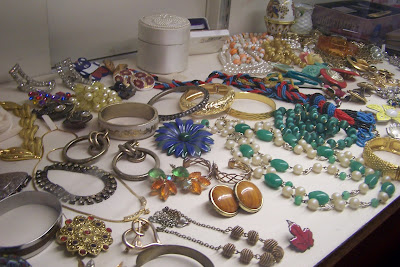 And for the guys: 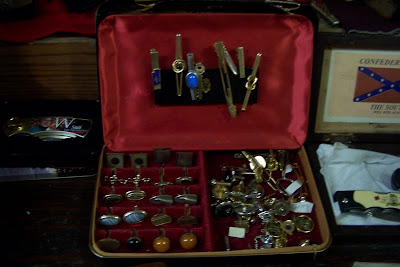 Steve was getting a lesson in painted label bottles from Milly and found some of these really interesting: 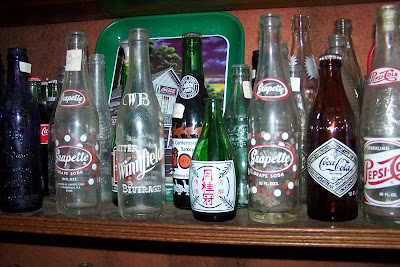 Here's some more; she has shelves of these things. 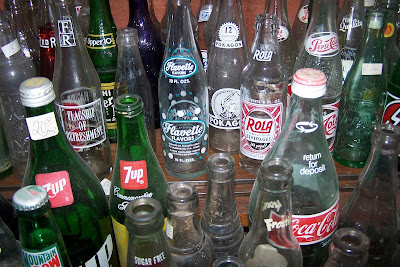 As long as we're talking about glassware, I rather liked these perky cranberry trimmed glasses: 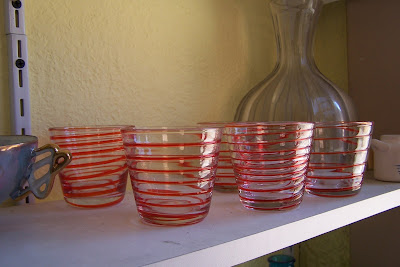 And I loved this ruby red glass vase: 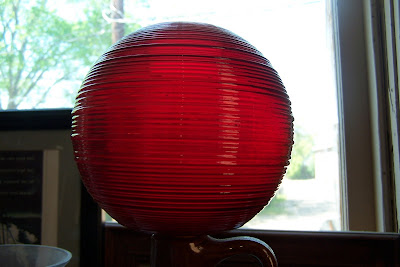 Milly is especially proud of this awesome wool long coat from the 1930s; it's in perfect condition (and by that I mean no rips, tears, or moth holes!). 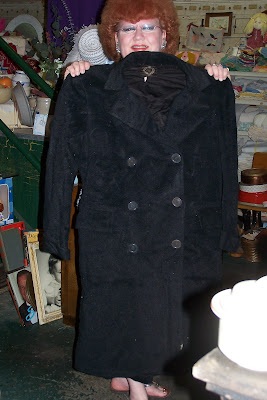 And for the serious LSU collector?  How about a band uniform from the 1930s? 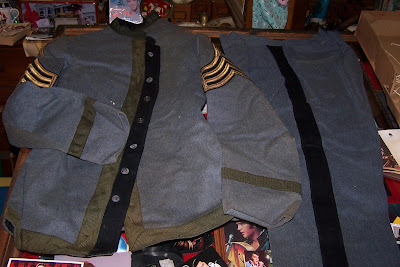 If you look closely you can see LSU stitched into the collar: 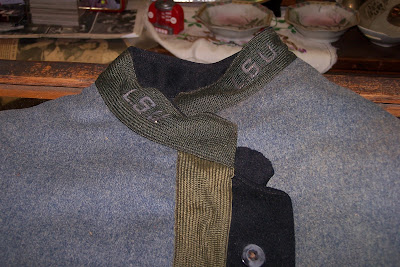 Here's an overlooking view from the second floor down to the first: 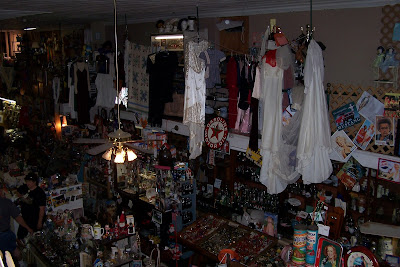 That round Texaco sign in almost dead center?  Someone came in and bought that while we were there.

Are you into clocks?  Here's a Seth Thomas cuckoo clock: 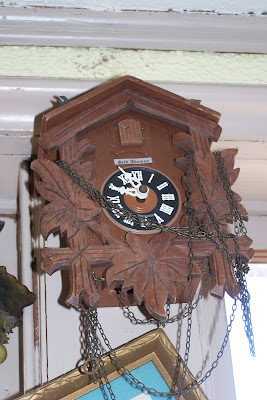 While we were there a lady brought in this cool, hand-painted chandelier from an early 1900s old Minden home: 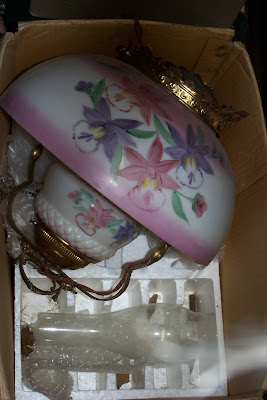 Later in the day Milly and Steve went up to the third floor and unpacked an old trunk filled with World War II uniforms.  Some of it was moth damaged but they salvaged some belts, scarves, caps, leggings, and a couple of uniforms.  Here is a little of it: 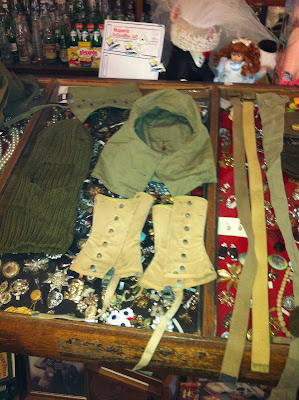 And still in the category of war memorabilia, here's a five gallon jerrycan, or water can: 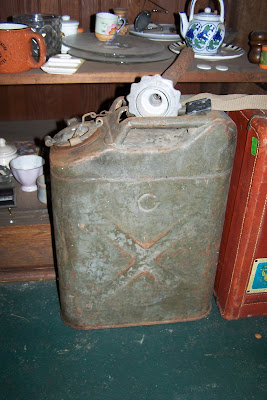 Milly taught us about reverse painting - you paint on glass, backwards.  Here's one: 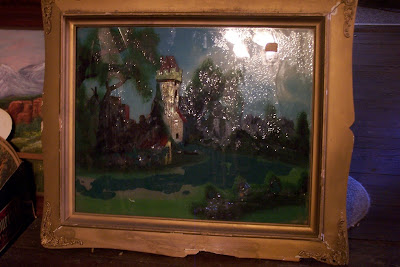 I took lots more pictures which will be going up over on Milly's Facebook page through the week.  So what did we come home with today?  Well, this cool carbide lamp caught Steve's attention.  He showed me how it works and it's really quite fascinating.  This one even still had some ash inside. 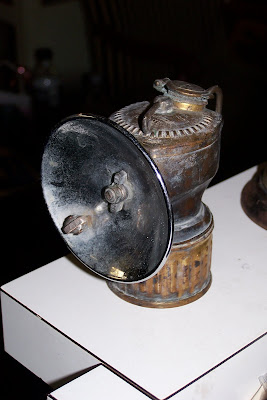 And for our anniversary Steve got me this shades of blue flower pin that I'd been admiring for a while: 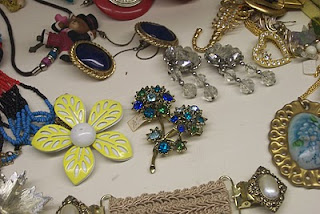 I also picked up a set of five Christmas themed stained glass suncatchers that are pretty.

It was a fun day, as usual.  The Boston Terriers were there, of course, and were glad to see us.  Milly brought us some fresh eggs from her farm and we helped her shut the place down at the end of the day.

Maybe you can point me in the right direction.

I have a London bobby's hat (present from a friend who's a sergeant on their force....kinda busy with idiots in the street now) plus his old night stick (wood about one ft long) and I'd like to hang them on the wall. Any ideas on something o hang a hat on a wall with?