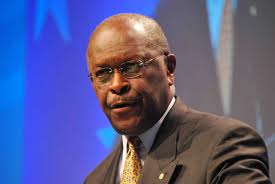 With all due respect, Mr. President, there is something you could do to ease the pain at the pump. Namely, declare and implement a “drill here drill now” strategy. And remove the ridiculous restrictions on shale oil deposits available out west.

The very speculators you are blaming for the run-up in gas prices would quickly retreat if they thought you were serious about an energy independence plan to maximize all of our existing natural resources. The problem is supply and demand, and expectations about the changes in those dynamics. That’s what drives gasoline prices at the pump.

Until that so-called "green energy" solution materializes, we are a nation dependent on oil, on petroleum products, on gas...coal!

As to the moratorium in the Gulf, Cain says:

The Obama Administration has used the Gulf oil disaster of a year ago to limit oil exploration in the Gulf and elsewhere. As a result, the oil production in the Gulf is down 13 percent versus a year ago. That also means that there are a corresponding number of people out of work, who are denied productive and well-paying jobs.

These people don't want BP handouts - they want to work.  We're not just talking about rig workers but all of the peripheral industry and small business that supports that.

Linked. Hope you had a fabulous Easter, Ma'am. God bless you and yours.