Would You Be Friends With This Man? 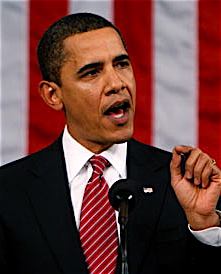 In his column yesterday, Jay Nordlinger noted Obama's habitual "peevishness" which got me wondering, why in the world, then, do Obama's popularity numbers remain so high?  I'm always hearing in the media that, well, Obama is polling low on certain issues, "but his popularity remains high!"  Why is that?  I realize it sounds partisan, but honestly, what's to like about this man?

He is indeed peevish and snippy.  Add partisan to that.  Nordlinger points to Obama's recent interview with Brad Watson in which Obama, now famously, said "Let me finish my answers next time we do an interview, all right?" (The story is here.)

When Paul Ryan put forth his budget proposal, Obama made one of the most partisan and divisive speeches in recent memory in response.   Mark Steyn:

There’s something sad about a man so carelessly revealing himself as entirely inadequate to the moment. Government spending is an existential threat to the United States. Whether or not anyone at the White House knows this, the viziers decided to shove the sultan out on stage with a pitifully unserious speech retreating to all his lamest tropes — the usual whiny, petty, and unpresidential partisan snippiness, and the ponderous demolition of straw men even he barely bothered to pretend he believed in:

So when it comes to "popularity" numbers, what is that, exactly?  Personal popularity as opposed to policy popularity, I guess?  How do we measure one's popularity?  When you think about people you actually know, what makes you like them?  Don't we look at that person's character?  His personality and personal demeanor?

Is Obama someone you would be friends with in the real world?

Not me.  He's decietful, peevish, boorish (his speeches on an iPod for the Queen?  C'mon!), and arrogant.

I don't like for my friends to lie.  Obama lies.  He purposely misrepresents issues for personal profit and my mama always taught me that was lying.  Example?  One (of many) that comes to mind is when he said over and over and over and over, "If you like your doctor, you can keep your doctor!"  A lie.  And he knew it.  You might still have your doctor right now, but don't count on it for long.

Another example?  When he said he never heard Reverend Wright spew his hate filled rhetoric in the twenty years he attended Trinity United Church of Christ, either in church or in personal conversations.  I'm sorry, but I just don't believe that.

I don't like my friends to fail to assume responsibility for their actions.  Obama has blamed George W. Bush for everything from the economy to the fact that the world hates us because of GITMO.  Even the BP oil spill was Bush's fault.  At this point, Obama totally owns the economy and the economic mess we're in.  His unrestrained spending and massive government and entitlement spending have done little to ease what he says is Bush's fault.  Own it.

Another trait I find unattractive in my friends is, as Nordlinger suggests, peevishness, or snippy, childish, thin-skinned responses.  Who can forget the drove it into a ditch metaphor:

“After they drove the car into the ditch, made it as difficult as possible for us to pull it back, now they want to keys back. No!  You can’t drive. We don’t want to have to go back into the ditch. We just got the car out.”

“I don’t mind cleaning up the mess that some other folks made, that’s what I signed up to do," Obama said. “But while I’m there mopping the floor I don’t want someone saying ‘You’re not mopping fast enough or you’re not holding the mop the right way.’ Grab a mop! Why don’t you help clean up?”

Or even when he told critics to quit talking and get out of the way:

"We've got some work to do. I don't mind, by the way, being responsible. I expect to be held responsible for these issues because I'm the president," Obama said. "But I don't want the folks that created the mess -- I don't want the folks who created the mess to do a lot of talking. I want them just to get out of the way so we can clean up the mess."

So why has this deceiving, petty, thin-skinned guy still got high popularity ratings as we hear from the media?  Or does he?

If you look at this poll from Gallup, Obama's personal popularity is in a freefall.  He's plummeted from an all time favorability high of 79 (in January '09) to a low equivalent of his standing in the fall of '07 at 52%. His unfavorability rating is at an all time high of 41%.

Polls on his job approval rating (rather than personal popularity) are equally low and falling.

So why does the media keep insisting he's so popular?  That's a rhetorical question.  You don't have to answer that one.

Of course, things can change on a dime in this 24/7 connected news cycle.  All it takes is one thing to turn it all around and the 2012 election is a long time away.  But, if Obama continues to campaign with his petty peevishness, I have to agree with Mr. Nordlinger that this quality makes him infinitely more beatable than the galvanizing uniter who campaigned for 2008.

Some leftist hack said that BO is just the sort of person every American would like to have over for dinner. Unreal. I said at the time that he's the last person I'd want to sit through a meal with. It's still true.

My fiance was nice enough to wake me up for the Royal Wedding at 500am...and I thanked God Her Majesty snubbed the Obama's. One, they would have delayed today's shuttle launch to they could have been at both events....and they would have expected their own horse drawn carriage! ;<)

As a person, there are things I might find to like about the man: some of the best photos are candid ones of him and Michelle alone together.

But I value loyalty and mutual respect in my friends - we put our friendship above personal gain while never asking for sacrifice on our own behalf, and even if we disagree on major things we still know we can personally trust each other. We do not try to control or change each other, nor do we judge. We take each other as we are.

Mr Obama is not that kind of person. He compartmentalizes his life, and removes people from the list if they don't put his interests above their own. The circle of people to whom he is loyal, and for whom he is willing to make sacrifices, is very, very small, very, very private, and dates very far back into his life. If that list ever grows, it is with ponderous slowness.


Sarah Palin, on the other hand, is an expansive person, whose list of genuine friendships grows continually and abundantly. She is willing to take the risks - and assume the responsibilities - that make that possible. She's more my type of person.