It's Another WikiLeaks Drop Day 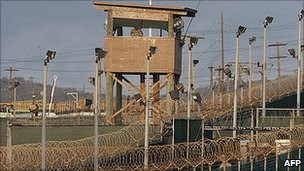 It's another WikiLeaks day and this time it concerns GITMO.  How much concern should this generate?  It depends on your perspective.  From Hot Air:

Mainly, these revelations don’t reveal much at all about AQ plots in the past, nor their operations today.  The most recent data in either report is years old.  They are both interesting for purposes of background information, but neither tells much of a story on its own or together that we didn’t already know.

And over at The New Yorker where bleeding heart Amy Davidson laments the use of "torture":

One sees how Guantánamo became a whisper factory: after years of interrogation, the subject many prisoners had left to talk about was other prisoners. Some were doing so after being tortured. The Times notes that Mohammed al-Qahtani was “was leashed like a dog, sexually humiliated and forced to urinate on himself” before implicating himself and sixteen other prisoners, and that those claims appear in the others’ files “without any caveat.”

If this is "torture" then I'd suggest Davidson expand her reading list to include Surviving Hell by Leo Thorsness, or Devil at My Heels

Michael Tomasky at the UK Guardian:

An honest inquiry into these errors that tried to assess what actually happened without pinning blame would be instructive. But what we're actually likely to get in the US, if we get anything at all, is a set of hearings in the House of Representatives under Republicans that's going to ignore Bush-era problems and focus completely on Obama-era ones.

The "errors" he refers to are repatriation and recidivism, specifically the Saudi and Yemini programs.

Michelle Malkin is not impressed with the release and points to the coordinated suicide attempts as discussed in the New York Times piece:

Gitmo sympathizers continue to characterize the suicides/suicide attempts as acts of desperation by poor, innocent potato farmers and bystanders. But these were clear acts of asymmetric warfare by cunning, cold-blooded jihadists versed in exploitation of Western sensibilities.

Lawyers, Guns and Money thinks this leak might not be all bad:

My only other reaction for now is that while the past four major WL releases were carefully framed to make US foreign policy decisions in the war on terror look bad, this new release may well have – or have been calculated to have – the opposite effect. While some news sources are stressing that “children and senile old men are among the detainees” other are almost making Obama look too soft on Guantanamo detainees (breaking news from the leak includes detainees’ threats against interrogators and claims of a nuclear holocaust if bin Laden is captured).

The Memeorandum aggregation is growing and is worth surfing through.  The value of the dump depends on your perspective.

Meanwhile, Private Bradley Manning has been moved to a more "humane" prison than his former digs at the Quantico brig.

(Cross posted at Potluck)
Posted by Pat Austin Becker at 9:56 AM

Big yawn. More 'secret' documents "released" that anyone could find and read for themselves with a little effort on the net. More pundit reactions left and right (literally). I think it all fits under the old news trade name 'yellow journalism'.

I guess the only people who can say that Gitmo water boarding is a truly good thing are the thousands who's lives have been saved by the singing it creates from the terrorists it's used on. That's what this is really all about.

Get on with the tribunals and start executing and everyone will probably shut up, but not the terrorists.