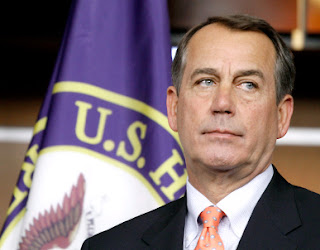 Andy McCarthy must have missed his coffee this morning.  He has a glorious rant posted over at The Corner blasting the "half-pittance" the Republicans settled for in the budget deal last night.  He makes some valid points but I do think there are a couple of good things about the budget deal.  I like that Boehner is forcing a Senate vote on the repeal of Obamacare; nobody expects it to pass, of course, but I like that it puts everyone on record.  Now, is that enough of a concession to settle for this paltry amount in cuts?  Probably not, which is what has McCarthy riled up:

With due respect, I think those who are praising the budget deal are deluding themselves. Under circumstances where we are trillions of dollars in debt, the GOP just caved on its promise to cut the relative pittance of $61 billion in spending because it’s just not worth fighting for more than the half-pittance of $40 billion Democrats claimed was their drop-dead number. “Drop dead” meant daring Republicans to shut the government down (which, as we know, doesn’t actually shut the government down). The Republicans blinked.

Boehner said last night that this was "as good a deal we could get."  Really?  Why?  McCarthy makes a valid point when he says

A mere four months ago, the big controversy in conservative and Republican circles was whether the GOP had reneged on their vaunted pledge to cut $100B in spending in the current fiscal year because they had seemingly come down to $61B. As I noted at the time, there was no question that, if you looked at the fine print of the pledge, the commitment was $61B — but that if you looked at reality, both $61B and $100B were laughably unserious.

It's difficult to argue with him when he says that $40 billion is pittance when you're looking at trillions.
One person in the comments to McCarthy's post said:

Don't let the perfect be the enemy of the good. Until we take the Senate and/or the White House we are going to have to do this incrementally. One salami slice at a time...

That's a lot of salami.  At this rate it would take us lifetimes to get the deficit under control.

On the other hand, there are plenty of people out there praising the deal and calling this deal a big win.  Phillip Klein calls it a deal "Republicans should be happy about":

But [Boehner]  did use what leverage he had to get a lot more out of Democrats than they wanted to give up. Democrats didn't want any spending cuts, and President Obama's original budget proposed spending that was $78.5 billion higher than what was agreed upon tonight. (The House and Senate are passing a seven-day stopgap measure that will cut the first $2 billion and give lawmakers more time to craft a final draft of the bill.) The deal includes a provision that would deny federal funds to pay for abortions in Washington, DC and would allow for Senate votes on the Planned Parenthood funding ban and repeal of ObamaCare -- both of which will force vulnerable Democrats into tough votes. And keep in mind that the ban on Planned Parenthood funding would have expired at the end of the budget year -- Sept. 30 -- anyway.

Klein stresses the fact that with a liberal Senate and a liberal President, at this point, we need to take what we can while still "holding Republicans' feet to the fire."  No doubt.
I sympathize completely with Mr. McCarthy's frustration but I think at the same time this is a battle that, as Klein and others have stated, is just going to have to be done incrementally.  Win the White House, win the Senate, and then let's talk.

(Much more at Memeorandum)
Posted by Pat Austin Becker at 9:29 AM

Dr. Fleming put up a post on Facebook that said 'we are not the government, we are only 1/2 of 1/3 of the government'. That puts it in better perspective and reinforces your statement on increments.