Take A Trip to the R. W. Norton Art Gallery for the Great Masters of Cuban Art Exhibit 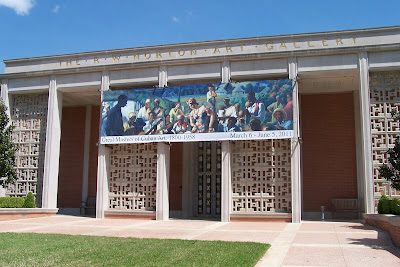 Steve and I took a drive over to the R. W. Norton Art Gallery this afternoon to check out the Great Masters of Cuban Art exhibit.  It features rare paintings from the Cuban Colonial period (1800-1898) and the Republican period (1902-1958).  I highly recommend it if you're in the area.

The Norton has 85 paintings that have not been available to the public for over a half a century.  The brochure that we picked up explained that Roberto Ramos and his brother, many years ago in Havana, helped an elderly neighbor move.  To thank them, the elderly neighbor gave them "a small piece of artwork by an artist that the elderly man claimed was quite famous."  It was by Carlos Sobrino y Rivero (1909 - c.1980).  The brothers were fascinated by the painting but their attempts at research were futile because Sobrino had left Cuba after Castro seized power.  Because of this Sobrino and his work "had been baned by a government whose ideology and laws penalize those who wish to seek exile."

The Cuban government squashed all mention and documentation of this artist who had won the National Prize for Painting in 1959.  Many other artists of the Republican era suffered the same fate, according to the brochure.

In fact, "the Cuban communist system banned all individual liberties soon after its inception in 1959, and the purchase, sale, or collection of art was declared illegal." 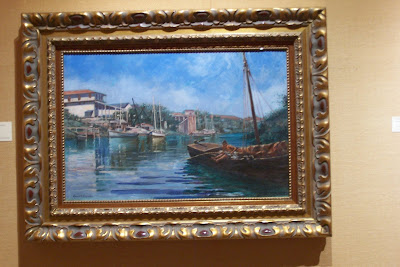 According to the literature, by the end of the 1980s, the Ramos brothers had collected ten paintings.  In 1990 they decided to leave Cuba.  They got a twenty-four foot wooden boat and hid their small collection of paintings in the ceiling:

They sailed for two days without land in sight.  Then, they ran out of fuel and were left to drift.  Two more days passed and they found themselves without food or water.  To make matters worse, a storm broke, causing turbulent seas with waves reaching fifteen to twenty feet, which threatened to capsize the small vessel.  With little hope of survival remaining, they were finally spotted by the US Coast Guard and brought to shore as immigrants.

According to this site, the Ramos brothers were taken into custody and their paintings disappeared.  When the brothers were released they tracked the paintings to a gallery in Coral Gables which had sold them.  Mr. Ramos tracked down the buyers and convinced them to return the paintings.

In America the Ramos brothers were finally able to study Cuba's true history and were shocked to learn of the liberties in Cuba before Castro.

In the 1990s the Cuban government needed cash so they finally established galleries where tourists could buy some of these old masterpieces.  Eventually they ended up in Europe, America and Latin America.  "Artworks from the colonial period were scarce because of their deteriorated condition."  Many of the paintings from the Republican era were similarly degraded but the Ramos brothers worked to restore what they could.

They based their criteria for collecting these works on the historical significance of each artwork and how each piece fit within the development of art and painting in Cuba.  Also considered were the contributions that the artists had made to Cuba's cultural advancement as well as to the establishment of its national identity. 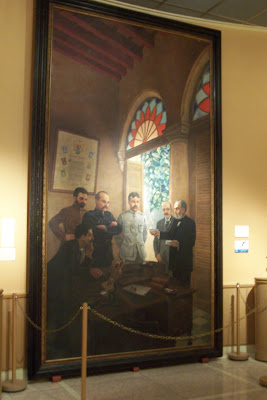 The huge painting, Finlay's Triumph, greets you as you walk into the museum.  It's over 15 feet high, I'd guess.  The painting had "originally been attached to the wall of the Cuban Presidential palace" and Castro ordered it destroyed.  The man who was to do the deed couldn't make himself destroy the painting, however, and he hid it.


"Fragments of the Cuban Presidential Palace wall are still adhered to the back" of the canvas; it took over two years to restore the painting which depicts Dr. Walter Reed and men from the US Military Yellow Fever Commission as they visit Dr. Carlos J. Finlay in Cuba.  "Finlay was the Cuban doctor that discovered that the mosquito was the transmitting agent for yellow fever."

It's a stunning painting.  Castro was offended by the military uniforms, however, and thus his order to have it destroyed.  Luckily, it wasn't.

I liked this portrait; the lady isn't named but is only identified as a likely member of the aristocracy: 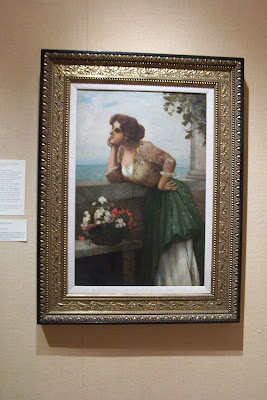 Steve liked this one by Hernandez Giro from around 1920 which depicts Colonel Theodore Roosevelt and the Rough Riders: 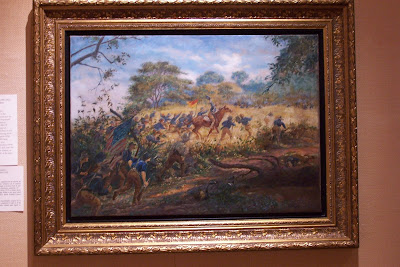 I thought this one of a wedding was whimsical and fun: 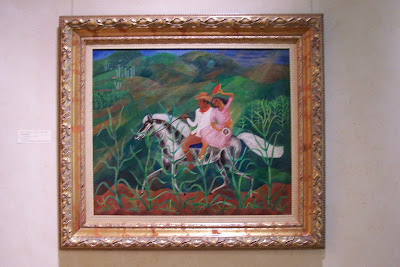 And I liked this one which is supposed to be "a country retreat": 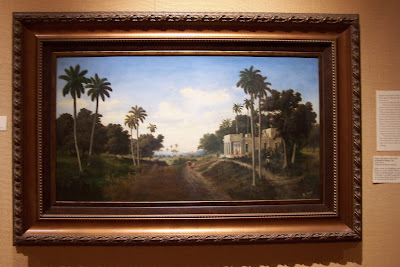 This is another huge canvas, although not as large as Finlay's Triumph.  It's called La Rumba by Antonio Sanchez Araujo: 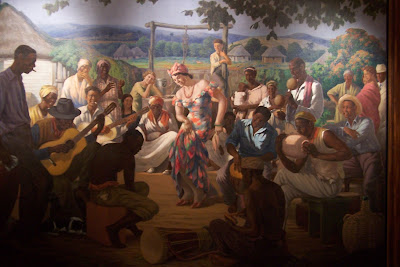 This one is called Yumuri Valley by Antonio Rodriguez Morey.  It's dated 1919. 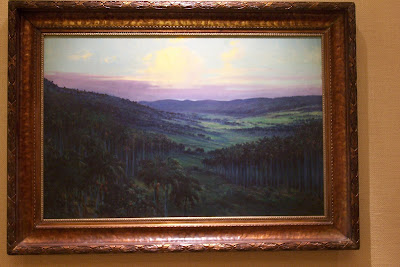 And finally this one, Guateque by Angel Valdez, dated around 1940: 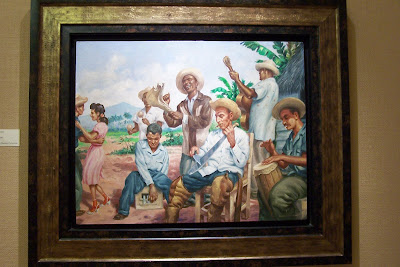 The only thing that surprised me was that there weren't more seascapes or coastal images, but I guess that's my own stereotype or expectation...I was expecting Hemingway's Old Man and the Sea sort of images.  Primarily the paintings depict the way of life in their appropriate time periods and the way people lived.  They're colorful, whimsical, fanciful, serious, and introspective.  Some are strange and mystical while others are more traditional.  All in all, they're all worth a trip to the Norton to see!

Related:  More from the SIGIS Take a Trip ... series.
Posted by Pat Austin Becker at 5:03 PM

These are great. There's nothing like original art. Your observation about the lack of coastal/ocean themes is interesting. Now I have a new art history topic to investigate! :-)