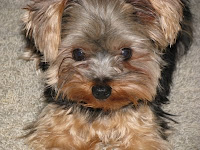 The AKC has released its Top Ten list of most popular dogs:

My grandpuppy, Bailey, (above) is ranked number two,
but obviously they did not see Checkers, my Boston Terrier, because they left her off the list. She's nu

They also didn't have Steve's dog, Abby, who IS a German Shepherd but she is a WHITE German Shepherd and the AKC does not recognize them. Idgits.
Posted by Pat Austin Becker at 8:50 PM

of course a mixed breed mutt cannot be on the akc favorite dog list, but casey had hurt feelings after reading the list. he thinks a pit/lab mix should have made the cut. skippy, a terrior-who-knows-what-else-true-100%-heinze-57, is delightfully unaware of the list because he loves life, is thrilled to be alive and his adhd won't allow him to be concerned over these matters.

oh, bella is reading over my shoulder and wanted to know if we could add a gray tabby cat to the list.

Oh heck, while we're at it, let's add that gorgeous Great Pyranese (sp?) that your mom had - that big white dog.

don't forget payton! mom and daddy loved payton. he was a breed that the akc would recognize. he was a springer spaniel or brittany or some water/hunting dog. he was also a sweetheart!

i thought of other dogs like the dog we had while growing up. skippy lived to be 16 or so years old. i named our skippy after her but he doesn't live up to her memory. he is more of a "knot head" or some other name that makes you roll your eyes and shake your head.

I don't think I would have wanted to live in a world without dogs.
I haven't, and I won't go, seen "Marley and Me." I'm still trying to get over from being upset after watching Old Yeller!" (and that was over 40 years ago.)

I have to say that picture of Bailey is like, the cutest dog picture EVER. EVER.

i haven't seen the marley movie but plan to when it comes to lamoni where tickets are $4 and a medium popcorn/coke special is $3.

it took a few years after first seeing the book "marley and me" before i could read it. the librarian at our beautiful library said it was funny and encouraged me to check it out. it was so funny that i found myself laughing out loud and could hardly read when i tried to read emory the funny parts. i loved the book so much that i bought myself a copy and bought ken and kyle a copy each and a child's marley book for brynn and laney 2 christmases ago.

it is heartbreaking. dogs grow old and die. i cried at the end of the book as much as i laughed at the rest of the book. if you cannot read the end, check out the book and read the first part.

Old men miss many dogs. They only live a dozen years, if that. And by the time you're sixty, there are several. The names of which evoke remembering smiles.

You see them in your mind, heads cocked and seated. You see them by your bed, or in the rain. Or sleeping by the fire by nights. And always dying.

You are young but they are old. They go. The German shepherd and the poodle, the basset hound and the mutt. They are remembered like departed children. Though they gave vastly more than they ever took.

And finally you're seeing dogs that look like them. They pass you in the street but never turn although it seems they should, their faces so familiar. Old men miss many dogs.