Jack Falla and the Backyard Rink 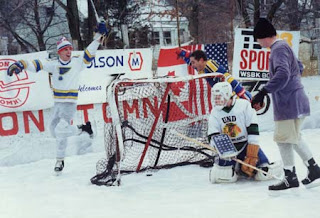 The NHL website has lots of great stuff pertaining to today's Winter Classic but I think my favorite is the article by Brian Falla discussing his father Jack and how they both loved watching the 2008 Classic one year ago today.

(In the photo, Brian Falla is on the left; he scored the winning goal in their "Molson Cup" backyard tournament. The "cup" was an empty beer keg with a small hockey trophy glued on top.)

Jack Falla wrote the classic, Home Ice, about backyard rinks and the joys of skating outdoors on frozen ponds or backyard rinks. It brings a totally different aspect to the game.

Since I don't, and never will, play hockey, a lot of this was beyond me, but what I loved about the book was Falla's way with words. I also loved the story he told; the book is a collection of essays and pieces he'd written through the years, some with his time at Sports Illustrated. It started out with his trials and errors in constructing his own backyard rink -- a process he perfected through the years. He called his rink The Bacon Street Omni, and the NHL article by Brian has some great pictures of the rink. He also visited other backyard rinks around the country to learn from others. He tells one terrific story of meeting Wayne Gretzky's father, then skating with Wayne himself. Gretzky gave him one of his sticks which Falla added to the stick collection at his backyard rink. He said, and I'm paraphrasing here, that Wayne would want the stick to be used, not sold on eBay or kept as a relic. Hockey sticks, he said, are meant to be used. He said that eventually the stick ended up as a stake for some tomato plant.

Brian Falla has his dad's way with words. Jack Falla died this past September, but I'm sure he will be watching the game today with the pure joy that outdoor skating brings!