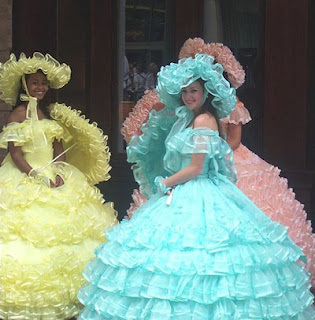 The head of the Alabama NAACP, Edward Vaughn, is objecting to the appearance of the Azalea Trail Maids in the inaugural parade. He says the group reminds him of slavery.

Who are the Azalea Trail Maids? They are high school senior girls who go through a rigorous selection process to serve as ambassadors to the city of Mobile. The organization is a long standing Mobile tradition and the Maids have appeared in the Fourth of July Parade in Atlanta, The Macy's Thanksgiving Day Parade, the Rose Bowl Parade, the Easter Parade at Disney World and the George W. Bush Inaugural Parade.

Former Maid, and current advisor, Marcee Hinds has a nice website about the Maids and what they represent.

I don't believe that Edward Vaughn's argument against the Maids will float really, but the audacity of it just knocks me out. Reminds him of slavery? Give me a break. Should we also get rid of large houses with columns across the front, like Tara? Should we quit showing "Gone With the Wind" on television? Where do you draw the line, really? Everyone on the planet can get offended about something, for crying out loud. Where does it stop?

**rolls eyes** SO RIDICULOUS! Everything has gotten so black and white that no one uses judgment anymore! **shakesfist** GOD!

did you see how the school's strip searched an 8th grade honor student with a perfect record b/c her Mommy gave her a prescription strength motrin to carry in her purse? the ACLU is at the Supreme Cour ton that one now and the appeals courts already decided with the kid and not the insane schools

this is like that. it's the SOUTH - we get to celebrate our heritage w/out everyone saying "ooh - it reminds us of slavery so now"