Review: On the Road With Gary Sinise 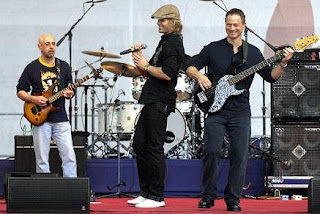 What a true patriot Gary Sinise is! I just watched the FOX special, "On The Road With Gary Sinise" and it was great.

He's been to Iraq several times as well as Afghanistan and many other places, but this special centered primarily on his most recent Iraq visit. You'll have to catch the rebroadcast, or get the soon-to-be-released documentary, but it's a great story.

Sinise is not at all self-promoting here, although he could easily be. His focus is all about the troops, their service, and their sacrifice. The segment on Hussein's palaces was incredible and horrifying. The gratitude of the troops to Sinise for his visit was very moving, especially the guy on the C-130 that wrote a message to Sinise on the brim of a hat and passed it down the line to him. Sinise read it then looked up at the guy who smiled, nodded, and thumped his own chest over his heart with his fist - a thank you.

On that same flight Sinise opened and read a note he received from another soldier at the base which said how much his visits meant to them. He was clearly overcome with emotion at the words of the letter. Very moving.

The special closed with Sinise doing a voice-over of how much it meant to him to receive the Presidential Citizen's Medal in December. What impresses me so much about him is his attitude of celebrity. He points out that he makes a good living and appreciates his freedoms, as should we all, but that he feels that the way HE can serve is by entertaining the troops. His Lt. Dan Band is pretty darn good!

In this day and age when so many, not all, but many, celebrities are so self consumed, it is more than refreshing to see someone like Sinise or Chris Isaak (who was on one of these trips) and others who give their time to support the men and women who volunteer to wear the uniform of our country.

Sinise closes with a reminder to us here at home to thank those folks who serve whenever we see them. It means more than you know.
Posted by Pat Austin Becker at 9:00 PM