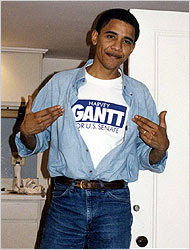 "Barack gives you this very simple slate. When you see him speak, you think of the man, not what he's wearing. But what he's wearing is important because it's the canvas he drapes himself in," said Jim Moore, the creative director at GQ magazine. "There's a very modern thinker there. He's not the pattern-mixing guy, not even the khaki guy. You'll very rarely even see him in jeans. He has an urbane, citified kind of palate. He has a vitality to him, and his image transcends race."

There's actually MORE of this nausea inducing drivel if you need it. Pass the Dramamine.

Oh come on! It's a men's fashion magazine; of course that's what they are going to talk about! Everyone can go on and on about Sarah Palin's pretty black suit or Michelle's Thakoon dresses or Cindy McCain's overpriced style, but people can't talk about Obama's style?

It's not a men's fashion magazine - if it was GQ that would be one thing but this is from their own home page:

"McClatchy’s Washington Bureau is home to an award-winning staff of journalists committed to top-flight public service reporting about Washington and the world. Our aim is to provide readers with the information they need to hold their leaders accountable and to make informed decisions, not only about public issues but also about their own lives and families."

And it was written by a political reporter. I know it's trivial of me to even bring it out, but I'm tired of the O-worship. Let him DO something before we fawn all over him.

I'm no expert but I thought Michelle's Thakoon dress was hideous.

Don't get me wrong, the cult of personality is tiresome in all arenas (entertainment, sports, politics), but this phenomenon existed long before Obama. Somehow, however, conservatives hold his popularity against him as if his looks, his speech, and his charisma were his only redeeming qualities. As if being popular were grounds for the dismissal of a record of accomplishment established long before anyone was paying attention to him.

People are excited about our new president. I still don't understand why that's a bad thing. I honestly feel for Obama because conservatives are going to be all over him for every little mistake he makes. Because he WILL make mistakes, but I feel like conservatives are just waiting to pounce on him. You do on this blog every chance you get. Are conservatives truly going to open their minds and give him a real CHANCE?

And I must have misread your post and thought it came from GQ. I think you're only fueling the fire by posting this article and continuing the conversation about it.

Well,not EVERYone is excited about the new president, but that said, I do recognize and acknowledge the historical aspect of it and find a positive in that regard.

Truthfully, it's not him personally but the vast differences between the conservatives and the liberal values that he champions that create the division. I am, as Bush 43 said today, pulling for him to succeed, of course. But as a conservative I fundamentally disagree with so much that he stands for, which we covered ad nauseum during the campaign.

I'm not even jumping on Mr. Obama in this post; I'm actually jumping on the media-celebrity-fawning that occurs every time he gets into a car, buys a shaved ice, lights a cigarette, or goes to the gym.