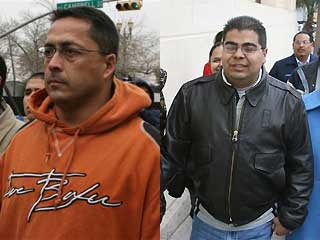 Josh Gerstein has an article on Politico this morning about potential Bush pardons. Like Gerstein, I don't think Bush is going to engage in a flurry of last minute pardons, controversial or not, but I suspect there are a few to come.

I'm really hoping for a Ramos/Compean pardon. Border security is a big issue for me and the way I see it, these guys were just doing their job. They were trying to stop an illegal from illegally entering the country with drugs. As you may remember, Ramos and Compean are serving lengthy federal prison sentences for shooting a drug smuggler who abandoned 743 pounds of marijuana. They shot Mexican national Osvaldo Aldrete-Davila southeast of El Paso after the suspect refused the agents' orders to stop. Wounded, Mr. Aldrete-Davila fled to Mexico, leaving behind the van containing the massive drug load. Then the drug smugger then files suit for violation of his civil rights, after being contacted by the federal government for his testimony. It was this drug smuggler's testimony that sent our border agents to prison.

THEN he pleaded guilty to drug charges, charges which occurred AFTER the previously described incident.

The message that the Ramos/Compean case sends is that we prosecute our own agents for protecting our borders. There's a lot of support for a pardon for these guys, including Diane Feinstein and others from both sides of the aisle.

I'm really hoping Bush acts on this one.

The Gerstein article also addresses a possible Scooter Libby pardon, but I don't think that's likely as Bush already commuted his sentence and Libby has not asked for a pardon.

Another interesting one to watch might be a possible pardon for Alberto Gonzales, which would be appropriate. I don't think Gonzales is asking for a pardon, either.

And here in Louisiana, folks are wondering if Bush will pardon Fast Eddie, Edwin Edwards. I'm thinking probably not on that one.
Posted by Pat Austin Becker at 11:32 AM

did you know Thelma's ex husband (father of her child) is a Border Patrol guy and has been for like over 20 years. half the reason she ended that relationship was b/c she couldn't handle what the job did to him and all the danger.

umm - yeah - you're guilty - you are running - the cops say stop - you stop or you get shot. this is pretty much a given, yes? since when did that b/c illegal?