Truth is Stranger Than Fiction? 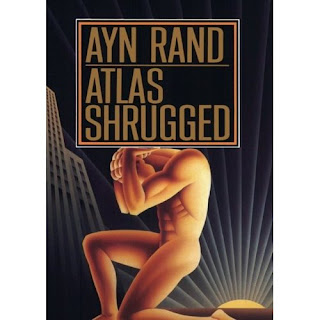 I've not read Atlas Shrugged since high school but after reading this Wall Street Journal article by Stephen Moore, I think I should dust it off:

The current economic strategy is right out of "Atlas Shrugged": The more incompetent you are in business, the more handouts the politicians will bestow on you. That's the justification for the $2 trillion of subsidies doled out already to keep afloat distressed insurance companies, banks, Wall Street investment houses, and auto companies -- while standing next in line for their share of the booty are real-estate developers, the steel industry, chemical companies, airlines, ethanol producers, construction firms and even catfish farmers. With each successive bailout to "calm the markets," another trillion of national wealth is subsequently lost. Yet, as "Atlas" grimly foretold, we now treat the incompetent who wreck their companies as victims, while those resourceful business owners who manage to make a profit are portrayed as recipients of illegitimate "windfalls."

Sound familiar? Yep. Rand was very familiar with socialism and it plays as a heavy theme in her works.

And it goes on:

One memorable moment in "Atlas" occurs near the very end, when the economy has been rendered comatose by all the great economic minds in Washington. Finally, and out of desperation, the politicians come to the heroic businessman John Galt (who has resisted their assault on capitalism) and beg him to help them get the economy back on track. The discussion sounds much like what would happen today:

Galt: "You want me to be Economic Dictator?"

"And you'll obey any order I give?"

"Then start by abolishing all income taxes."

"Oh no!" screamed Mr. Thompson, leaping to his feet. "We couldn't do that . . . How would we pay government employees?"

Abolishing the income tax. Now that really would be a genuine economic stimulus. But Mr. Obama and the Democrats in Washington want to do the opposite: to raise the income tax "for purposes of fairness" as Barack Obama puts it.

And trust me, Bush and the Republicans are not blameless in this either, despite the seeming slant of Moore's conclusion here. Apologies for the heavy cut 'n paste post but I've got to run dust off my copy of Rand's book.

one of the best books ever to me - i haven't read it in years and (shame) didn't finish it. (yes- shame) i read 75% of it. like I did with Moby Dick. :p but wow -i remember thinking then "omg that sentence was PERFECT" and then "omg that one was TOO" totally blown away