I just ordered two additions to my nightstand reading, as if the eight other books sitting there might eventually run low or something. I'm almost to page 100 of Team of Rivals (which is very good, by the way.)

The first is Inside Gitmo: The True Story Behind the Myths of Guantanamo Bay by Gordon Cucullu. The author is a retired Army Lt. Col. who went to the camp and interviewed everyone from nurses and cooks to guards and interrogators. Cucullu seems to have concluded that things were in fact bad in the beginning but have long since been corrected and that Gitmo is now one of the most human prisons anywhere. 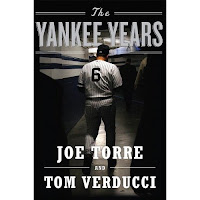 And longtime Yankee fan that I am, I've ordered Joe Torre's book, The Yankee Years. I've always liked Joe and I think it'll be an interesting read. Did you know that his doctors told Steinbrenner about Joe's cancer before they told HIM? Crazy. The power of the pinstripes.

I also ordered John Grisham's The Associate because I need something light every now and then! I usually save him for the summer, and at the rate I'm going, it will be summer before I get to it!
Posted by Pat Austin Becker at 7:52 PM