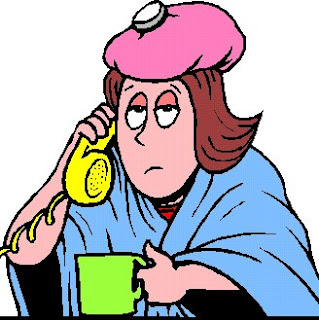 I am getting a cold and feel like crawling under the bed for a week. Whenever I feel a cold coming on I break out the Zicam because it really works. I hope it works this time. Bleh.

We have Monday off so I am looking forward to a long three day weekend. I'm making as few plans as possible except for catching up on reading, blogging, and spending time around the home front. On Tuesday, I learned today, we will showing the inauguration. Bleh. Wasn't planning on watching.

I know I have readers that loathe and despise Bush, and I surely don't agree with everything he's done, but I think his farewell address was a class act.

I'm really interested in seeing what BHO is going to do with Club Gitmo. I've been reading and researching a lot about the issue lately, especially since he's said he's issuing the Executive Order to shutter the place next week. That alone just puzzles me, as I've posted recently, because that's just a symbolic statement. He can't close Gitmo next week because he has nothing to do with the prisoners that are there. They don't want 'em in Kansas, at Leavenworth. They don't want 'em in San Francisco. Pretty much NOBODY is stepping up to take charge of a bunch of hard core jihadists. We can't just let them go free. For some of them, their own countries don't want them back and in some cases, we don't want to send them back because they'd be tortured or killed. Or rejoin the jihad.

There are no good answers on that one. All the options are bad. Which is why Bush kept it open. There are bad people there.

The confirmation hearings this week have held few surprises really. I was a bit surprised that our Louisiana Senator Vitter was the lone vote against Hillary; glad he didn't cave to pressure. I've been disappointed in the Republicans as a whole for not being tougher in their questioning and especially for so many even being absent in the Hillary questioning. That was just a schmooze-fest. The Holder hearing went as I expected with no shockers there, either.

The Geithner thing remains a puzzle for me but I think he'll get a pass on the deal. How can you not pay your taxes then say "Oh I forgot?!" and get away with that? And THEN slide into this plum position in the BHO administration? He gets a no confidence vote from me. Not that it matters.

Ah well. It's cold out and I'm going to hunker down under blankets with my puppy and get some rest. Somebody send over some chicken soup.

Hope it's warm wherever you are.
Posted by Pat Austin Becker at 7:46 PM

I was sick for three weeks. The answer for me was:

Now I've been sinus and cold symptom free for nearly two weeks which is unheard of here in Dallas with the sinus issues.