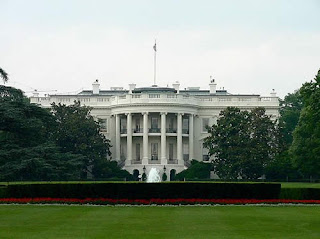 Roger Doiron, an organic gardener and food activist in Scarborough, Maine has started a campaign (complete with website) to encourage the Obamas to dig up part of the South Lawn for a vegetable garden.

Actually, through the years, first families have done various things with the South Lawn. The Washington Post has the article and reminds us that during World War I Woodrow Wilson turned the South Lawn over to grazing sheep.

While the White House already has a small vegetable garden on the roof, Mr. Doiron would like to see a five acre veggie garden. That's a lot of tomatoes. He would like for the Obamas to grow food to furnish area food banks as well as the first family. He makes the comparison to the Victory Gardens of the World War II era.

Naturally the Obamas would not be expected to tend this garden, although I find growing my own vegetables kind of fun (but not five acres worth)! The National Parks service would inherit this detail.

Or perhaps Mr. Doiron would like to bring his volunteers over to hoe the carrots?
Posted by Pat Austin Becker at 8:10 PM

Thanks for helping to get the word out. Just one correction: we're not asking for a 5 acre garden. We're comfortable letting the Obamas and the National Park Service decide on the final size and shape of it with some input from citizens.

I'm hoping the Obama(s)? have more important things to do...