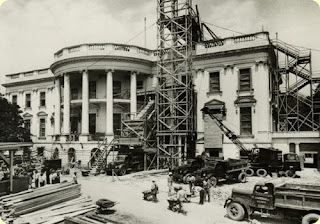 I'm not sure how long this link will work, but here is my school watching the inauguration. We aren't a very big school - about 650. The local news station came and shot some video; the link may not work very long.

I know you are dying to know what I thought. I really was not able to watch all that much. I saw the oath and the speech and then as soon as that "poem" was over I had to shut it down. The flub over the oath was not a big deal to me - it just humanized it all. Whether it was Roberts (I think it was) or Obama's flub, didn't matter! Human! Michelle looked nice, except I just didn't dig the green gloves; but there's a reason I'm not a fashionista. I have no fashion sense. I'm sure she was very chic.

I will say this: during the oath and during the speech (or at least most of the speech), I had numerous kids watching in rapt attention. A couple of them specifically stand out. The look of....what can I call it...not wonder, exactly, and not exactly pride, but some of both, certainly. Inspiration? Maybe a bit of that, too. There were others that were less impressed or interested, and some went to sleep on the speech. But I'm glad they got to see it.

As far as the speech, it will be parsed and analyzed to bits and I'm not going to do it here. I heard rings of wealth redistribution in there that jangled,

"A nation cannot prosper long when it favors only the prosperous. The success of our economy has always depended not just on the size of our Gross Domestic Product, but on the reach of our prosperity; on our ability to extend opportunity to every willing heart - not out of charity, but because it is the surest route to our common good."

But, we'll see down the road. Today isn't the day for criticism, for me. I'm not going to watch the balls and parties. I'm long over the hype and the celebrities and the kitschy souvenir crap and the cheap shots at Bush. Even the new White House site launched today is taking shots at Bush on the Katrina reaction and I don't EVEN want to get started on that and our ex-Governor Blanco and Mayor Ray Nagin. So, enough inauguration for me. I'm spending the rest of the evening reading Team of Rivals and watching the Penguins play hockey.