On The Road With Gary Sinise 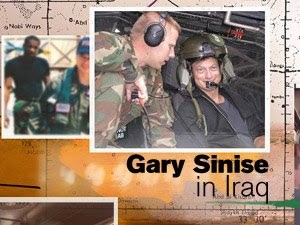 Saturday night FOX News is airing a Gary Sinise special called On The Road in Iraq with Gary Sinise; here's what Sinise, who recently was awarded the Presidential Citizen's Medal, says about it:

"My brother-in–law Jack Treese served as a medic in Vietnam and wore his dog tags on a rosary with a St. Christopher medal. I wore that same rosary and dog tags as my character, “Lt. Dan”, in the movie “Forrest Gump”. With the help of the USO, my brother-in-law Jack, and my friend Jonathan Flora who used a handheld camera, you will see what happened on a seven day trip I took to Iraq last summer which will air this Saturday night on the FOX News Channel. It was my fourth trip there with the USO. My goal, as always, was to cover as many miles as possible and to take pictures, sign autographs and shake hands with as many troops as I could in the time I had."

As previously posted, Sinise is a huge supporter of our troops and is one of the most active celebrities working in the old Bob Hope USO fashion. I remember all those Bob Hope specials on TV as I was growing up. Sinise works tirelessly to thank our troops for their service.

If you get the chance this weekend, check it out, or at least set your DVR! You'll see Sinise meeting troops throughout Iraq and a bit of his Lt. Dan Band!
Posted by Pat Austin Becker at 6:17 PM