Full Metal Jacket Reach Around: The Catching Up on a Sunday Edition 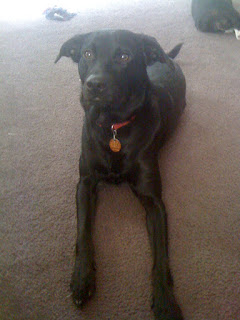 I hate to speak too soon, but things might be starting to settle down a little around here.  I'm about to get a handle on my work projects and I hope everything will settle into a normal routine soon.  I spent three hours this morning updating my teacher and course webpages; it would not have taken a normal person nearly as long, but I am technologically challenged in many ways.  This is why I use Blogger:  it's EASY.

Steve and I have been trying to take advantage of a kicked back weekend; I went out to see my mom yesterday for a bit, then Steve and I went to Prime Rib night at the Barksdale Club for dinner.  We called it an early night and today I worked on those webpages until I thought my head would explode and then headed out to the grocery store.  This afternoon I still have a little more work to do, but mostly I hope to get caught up on some reading and blogging.

Speaking of blogging, let's see what I can sift out of the web this morning:

Pirate's Cove has a personal account of the Glenn Beck rally.  How in the world can the numbers estimate vary sooo widely?  Doug Ross attempts to nail that one down.  Left Coast Rebel has LOTS of pictures.  No Sheeples Here adds her own perspective as well.

American Power takes on Obama's weekend address in which he claims credit for Iraq.

Mind Numbed Robot had quite the birthday celebration!

Sister Toldjah has Rubio's Republican response to Obama's weekly address yesterday in case you missed it, and I did, so I'm glad she posted it.

I'm glad I'm not the only one struggling through August; Professor Jacobson has similar feelings.  He did pick up on an interesting piece of subliminal deception, howerver.  Ed Driscoll joins in that discussion.

SWAC Girl has got fall fever.

And then there was the discussion at Adrienne's place over the unfortunate photo of Obama on his bicycle.  Little Miss Attila nails it as does Bride of Rove.

The Camp of the Saints is spinning some good tunes.   And speaking of....A Cop's Watch went to see Meatloaf!

The Daley Gator picks up on a post on The Green Police.  Woe to the flunkie who has to dig through my garbage...

Sandy has met her limits with the Shreveport Slimes over their editorial cartoon today, and echos what I hear many folks say.  I haven't taken the paper since 2003 and have not missed it.

Grandpa John succeeds in simply grossing me out.

I've often wondered about Red's blog's name, and now I get it.  THAT's a corndog!

Pundette has an excellent roundup of newsy bits.

Wyblog is marking his calendar for Obama's next speech to schoolchildren.


And with that I've got to cut it off; I've been on this laptop all day long and need to get my dog's tennis ball out from under the couch; he's crying like he's lost his last friend.
Posted by Pat Austin Becker at 4:02 PM

Thanks for the link, Pat. I'm enjoying a lazy Sunday afternoon as the air cools and I listen to the circadas in the trees. Fall is definitely in the air....

I took it easy today and actually, finally, got to watch Midway all the way through for the first time in years [God love TCM].

The film ends with a quote from Churchill that I'm sure would never be included in there PC times: The annals of war at sea present no more intense, heart-shaking shock…the qualities
of the United States Navy and Air Force and the American race shone forth in splendour".

AW! Somebody wants to go outside n' play. Cute puppy. THanks for the link-back paddy-whack!

Glad you're having a great day off...and my hearing is starting to come back after last night...how the hell Meatloaf has any hearing after 30 plus years touring is a mystery to me.

Just curious about school...how common are school homework webpages these days? I wondering because I recently became a kinda step father to two girls and I'm seeing modern education from the viewpoint of a parent for the first time...I need all the help I can get and both schools have sites like this...thank God and thank God they didn't have them when I was a kid...."No Mom, I don't have any homework.. :<)....I would have been nailed countless times with this!

Thanks for the link, Pat! Linked ya back in the Patriotic Pinup post.

It was great at the 8/28 rally. Unfortunately, something was wrong with the memory card I was using, and none of the pictures came out. Wish I had known, would have switched and used my iPhone. Which I also forgot would take video (insert forehead slap here)