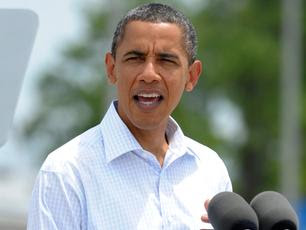 Concidentally, there are two pieces out this morning suggesting that Obama will be a one-term president.  Politico has an article entitled:  Obama, the One Term President, by Roger Simon, while The American Spectator has Our One Term President by Tom Bethell.

Each author attributes this prediction to different causes, however.  Simon suggests Obama's problem is...:

You have to stay on message, follow the polls, listen to your advisers (who are writing the message and taking the polls) and realize that when it comes to doing what is right versus doing what is expedient, you do what is expedient so that you can get reelected and do what is right in the second term. If at all possible. And it will help your legacy. And not endanger the election of others in your party. And not hurt the brand. Or upset people too much.

Obama does none of that.  He does exactly what his handlers want him to do.  In the wake of George Bush's unpopularity, George Soros and friends helped push Obama to the top spot for the purpose of enacting as much radical legislation as possible, as fast as possible, before his luck ran out.  Thus we witnessed the head-spinning shenanigans of the first year in office which dealt with Obamacare, the Stimulus, the expansion of the welfare state and Cap and Tax, to name a few.  They ran out of steam on the Cap and Tax issue so a great deal of that regulation was empowered to the EPA.
I don't think anyone, Obama included, ever expected him to be a two-term president.
Bethell, at The American Spectator, suggests a different reason for the One Termer label; he points to the economy as the primary Achilles heel:

Most important from Obama's point of view is the economy. It is still in poor shape and is likely to stay that way. The unemployment picture has not brightened. In California it is 12.6 percent, while in Michigan it is 14.9 percent.

There are no real signs that it's getting better soon.

So...will Hillary steal the nomination from Obama in 2012?  Bethell points out that it is always possible the "Republicans will nominate a dud" which has happened before.  Obama could still slip in a second term, however, his poll numbers drop lower and lower almost daily.  This latest mosque controversy don't help.

The Republicans need to be getting their house in order.  I need to see a leader rising to the top, and quick.  I do not want to see the same tired faces.

Do NOT just hand this man a second term.  We may not survive it.
Posted by Pat Austin Becker at 6:27 AM

I can't see how he could possibly be re-elected except that I'm suspect of the whole voting process in the country now...I wish Chris Christie would consider running - he's the only conservative that I really like for that role right now. If Obama could get elected on the small bit of experience he had, why not Christie?

More like 0.75 term, once the GOP puts the special prosecutor on this thug

The rule is, the first thing a pres does in office is start running for re-election. BHO dropped that, because he is arrogant enough not to care about it. His agenda is the most important thing to him. He has conducted the most perfect, classic bait and switch I have ever seen. He really does admire Lincoln: He wants to suspend habeus corpus.

If we can keep the Republicans from allowing internet voting in the primaries, there is a chance. If they open up the floodgates to the expats via the internet we'll have another "surprise" like this one.

The primaries need to be watched closely. Tea Party folks need to be poll watching at every single polling place in the country, and other harmless looking Miss Marples sitting outside just past the 100 ft mark with cameras in their knitting.

The real old-style democrats who want their party and their legitimate caucuses back need to start taking charge again too.

Hilary will not win the nomination until she cares more about winning than she does about proving she is not Bill's wife. I'm afraid by the time she realizes that, though, she may as well be Mrs Humphrey.