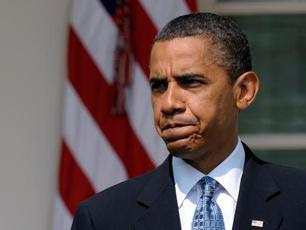 Obama's position on the Ground Zero mosque has been the dominant topic on Memeorandum for days; and of course, now he's pulling back on his statement.  I think Byron York handled this one best when he pointed out that Obama is very well aware of the fact that he says one thing and means another:

Now, there is simply no doubt that Obama's Friday evening speech, in the context in which it was delivered, was an endorsement of the Ground Zero project. It was certainly widely understood as such...But on Saturday, Obama said all those listeners were wrong, that they misunderstood him.

That's the whole thing...context.  Of course he wanted his iftar guests to conclude he supported the mosque.  Why else issue such a statement at such a time and place?

But now, he has the luxury of saying, "Wait!  Wait!  You misunderstood me," to everyone else.

Of course the Imam has a legal right to build there.  Once again, that's not the issue.  The issue is the sensitivity of it.  I forget who said it but someone on television made a comparison to Pearl Harbor; nobody would consider building a monument to kamikaze pilots at Pearl Harbor.  It's not so very different.

Drudge isn't shy about heading into this one: And, now, it should come as no surprise to anyone that Obama's buddy, Charlie Crist, has come out in support of Obama's statement.  You've got to just love this one.  Crist, who was just nearly tanked by the photograph of him and Obama as he supported the stimulus, now comes out in support of the mosque:

"I think he's right - yeah," Crist, who was elected governor as a Republican but is now running for Senate as an independent candidate, told CNN. "We are a country in my view that stands for freedom of religion. You know, respect for others. I know there are sensitivities and I understand that, but I think Mayor Bloomberg is right and I think the President is right."

And on the same day we learn that Rubio has passed Crist in the polls.  This one is still very tight, but Crist is doing himself no favors here.  Keep on talkin', Charlie.  Keep on talking. Maybe you'd like to go take a dip in the Atlantic with the Obamas while they're on yet another vacation, this time in your state.

It'll be good times watching Gibbs spin all this tomorrow.  Can't wait.
Posted by Pat Austin Becker at 11:09 AM

Oh thank goodness, it's not broken. Ever since Barry took office my bullshit meter has been pegged out and hasn't left the red danger zone. Since the needle hasn't moved off maximum for about two plus years I thought it was broken for a moment.

What, Hussein Obama didn't anticipate that endorsing the Ground Zero mosque would confirm his true loyalties to the American public? That's some impenetrable bubble he's living in.

I'm not as convinced as many by the argument that the imam has a legal right to build at this site. As Nice Deb pointed out, "City officials, eager to deflect the criticism of a righteously outraged public, claim that nothing can be done . . . something that anyone who has contended with zoning boards across the country knows to be untrue."

Somebody made a mountain or two of red tape magically disappear for the imam and his developers. Just think about how much red tape Louisiana had to process to build some sand berms against a tide of oil during an emergency and you'll get the idea immediately.

Can Charlie even read a poll? 70% of Americans oppose the mosque... and in Florida it's probably 80% with all the retired NYers.

As badly as Crist wants to win that Senate seat... now he's willing to go to bat for Obama on a highly unpopular issue. You've got to wonder then what's the quid quo pro here?

So we know now if there was any doubt that Obama is a Muslim. What bugs me about Muslim influence today, is the demographics. Nearest estimates in 2001 show anywhere from 1.8 mil to 2.8 mil population in the US. CAIR (hahahah) claims that in 2010 there are 7-10 million in US. That would be quite a growth factor, but not shocking, they all want to leave the Mid East and come here. And almost the entire black prison population has been converted to Islam since 01. Even so, it's a darn small number in comparison to the US Christian pop., and if it weren't for 9/11, the world's hatred of Israel and love of the PLO & company, and the oncoming war in the Mid East, Muslims here wouldn't rate a headline.

All religions of the world being accepted in America is a basic principle on which our country was founded. The founding fathers [and mothers] came to this continent to escape horrible persecution in other places.

I admire our President for reminding us all of this. There was a time that Catholics were persecuted. Jewish people were excluded from many towns as residents. Certainly you all remember when Jews, Catholics were routinely not welcomed in social clubs!

You who speak against this are handing over your citizenship to fear.

There was a time that Catholics were persecuted. Jewish people were excluded from many towns as residents. Certainly you all remember when Jews, Catholics were routinely not welcomed in social clubs!

Nope- before my time. You know what WASN'T before my time? 19 Muslim terrorists flying hijacked aircraft into the World Trade Center and Pentagon.

How many mass-casualty attacks on US soil can the Catholics and Jews take credit for? I mean...that's assuming you're not one of those truthers who think that Bush or the Israeli's brought down the towers.

You who speak out for this are handing over your citizenship to Political correct-ness and appeasement.

Tell me why, Charlene, we must show senetivity towards Muslim terrorists and their enablers whenever they try and blow up our soldiers, our commercial airliners, our embassies, Times Square, our ships, our first responders.....but extending the same courtesey to the surviviors of 9/11 and the loved ones of those murdered on that day is somehow beyond the pale?

Oh...and for the record, Obama did not show himself to be some sort of clandestine muslim after his speech on Friday night. He simply showed that he was in fact paying attention all along to what the 'Reverend' Wright had to say those 20 years in his church.

You say political correctness because you do not agree, so it's simple to lump a dissenting opinion there. Our country was founded with a clear and important separation of church and state, and for good reason. Terrorism is not a Muslim invention. There were many instances of Catholics and Jews being terrorized by those not wanting them or their houses of worship in their communities. The death of 168 people in 1995 in Oklahoma City by Timothy McVeigh, an Irish Catholic and his group is another more recent example. The Westboro "Baptist" Church's actions in attempts to terrorize families of American soldiers who died in foreign wars, is another.

All groups, heck the general population, could develop radical factions that think taking up terrorism is justified to reach their goals.

All the snide words used to trivialize those who do not agree with your opinion, reveal little about the point but more about the one using those words.

The death of 168 people in 1995 in Oklahoma City by Timothy McVeigh, an Irish Catholic

So it was an Irish Catholic milita then? Jeez.....usually the intellectually lazy gravitate towards the IRA when they want to weave their disengenuous 'Catholics are terrorists too! See?!' strawman.

Terrorism is not a Muslim invention.

But it certainly has been 'improved upon' as it were by practitoners of that faith.


All the snide words used to trivialize those who do not agree with your opinion, reveal little about the point but more about the one using those words.

Well, boo freakin' hoo- guess I'll just have to quit the internet then.

What's wrong? Didn't seem like the NAACP, the media or the Administration was the least bit reluctant to use the 'Dangerous Extremists' broad brush to describe the Tea Party or anybody opposed to the costly, onerous juggernaut described as healthcare 'reform'. Suddenly now you're concerned about others being painted with same brush?

Quoted from and Linked to at:
The House Of The Rising Muslim