Wrong on So Many Levels... 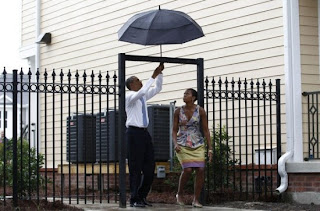 There is so much wrong with this picture (stolen from Tammy Bruce) and this article that I just don't know where to start.  Tammy covered the picture pretty well, and yes, there are a lot of cracks to be made about the umbrella situation here, but what jumped to my mind was "What in the hell is she wearing?"  Why, oh why, does our first lady feel such a penchant for dressing in patterned flour sacks?  I know.  It's petty to criticize Michelle's tacky wardrobe (which gets tackier as time goes on, if you've noticed), but I do long for some class and dignity from that quarter.

This Politico piece is something else altogether.  It just shows, once again, what a thin-skinned whiner this president is.  When Brian Williams asked Obama about the recent poll regarding Obama's faith, Obama's response was

“I can’t spend all of my time with my birth certificate plastered on my forehead,” quipped Obama, who took a deep breath to gather his thoughts when asked if the poll reflected his inability to communicate with voters.

“The facts are the facts. We went through some of this during the campaign — there is a mechanism, a network of misinformation that in a new media era can get churned out there constantly,” said a visibly annoyed Obama, referring to “birthers,” who have waged a guerrilla campaign questioning either the existence or the validity of his Hawaiian birth certificate.

Did he really answer the question?  Williams asked about his faith, not his birth certificate.  And I don't think anybody asked him to plaster it on his forehead, but if he's volunteering....  Personally, I don't give a damn about either at this point, but it does seem that he sidestepped the question a little.  The birther question isn't necessarily the same as the Mulsim question.
But, that's beside the point.
He was miffed at a question regarding the BP spill response as well, saying it's nothing at all like Katrina.  Did you notice that while he was boasting on his rapid response and quick efficiency in capping the spill in his Xavier speech yesterday, and while promising to stay with New Orleans until she's "all the way back," he had nothing to say about the moratorium.  Nothing.  Nada.
He was also a bit miffed when Williams asked him to clarify his position on the mosque, proving again that he's missing the point upon which Americans are so angry with regard to this issue:

“I didn’t walk it back it all,” he said. “I was very specific with my team… The core value and principle that every American is treated the same doesn’t change… At [a White House Ramadan celebration], I had Muslim Americans who had been in uniform fighting in Iraq… How can you say to them that their religious faith is less worthy of respect?... That’s something that I feel very strongly about.”

Nobody is arguing the right to build a mosque or asserting that their religious faith isn't worthy of respect.  We're protesting the decision (as opposed to "right") to build it right there.
I'd have expected him to be a little less petulant and defensive after a lovely vacation at the Vineyard....well rested and all that.  But there he was, nonetheless, in his typical defensive mode.
Tiresome.

(More at Memeorandum)
Posted by Pat Austin Becker at 5:39 AM

It is not so hard really to figure out as one approaches an entry way that one should lower or close up an unbrella to go through instead of wrestling with it while figuring a way to get on the other side. I guess I'm too stupid to understand brilliance.

The first thing that jumped out at me is Michelle's scowl. She is always scowling when unguarded and not specifically looking at a camera. Then concerning her wardrobe and living in Central Texas, I'm too backward to recognize fashion when I see it.

Are you kidding me? Petulance is his M.O. He's taking those vacations on our dime because he's getting while the getting's good and probably feels that we owe it to him. Punk on him!

Sometimes you are just too smart for your own good.