By Signing the Birther Bill, Jindal Would be Disrespecting Obama, or Something... 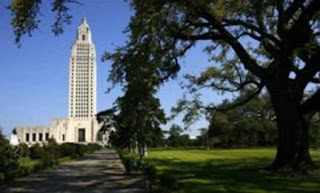 Two Louisiana lawmakers are generating some controversy and gaining some national attention with their "birther bill" filed for the upcoming legislative session and the Baton Rouge Morning Advocate sees the whole thing as a matter of disrespect to Obama.

The bill, sponsored by Louisiana Representative Alan Seabaugh and state Senator A. G. Crowe, would require that all candidates in primary and general elections for President, Vice President, the House, and Senate submit an affidavit that includes:

"An original or certified copy of the candidate's birth certificate that includes the date and place of birth, the names of the hospital and attending physician, and signatures of the witnesses in attendance."

A commenter at the Bayou Buzz blog said:

This is a horribly conceived bill. It was designed to flush out Obama for only providing an "abstract" birth certificate form, but would not only seem to flush out people born in places that don't issue "photostatic" long form birth certificates, but anyone born in Louisiana. If this bill passes and isn't struck down, Jindal (born in Louisiana) might not be able to get his name on the ballot in Louisiana if he runs for Congress or President/Vice President. How's that for irony?


Jindal, for his part, has said he would sign the bill if it reaches his desk.

The Baton Rouge Morning Advocate has posted a scathing editorial against HB 561:

Requiring a presidential candidate to present his birth certificate in Louisiana is “just following the Constitution.”  This is the dishonest statement of legislators pushing a “birther” bill in the Legislature, and Gov. Bobby Jindal, who says he would sign such a bill if it passes.

Regardless of how one feels on the "birther" issue, I'm not sure why showing proof of citizenship is such a bad thing.  The editorial goes on...

The assertion that President Barack Obama was not born in the United States is false. But calling for “enforcement” of the Constitution in this context is a cover for shady and slippery politics by Jindal and others.

Our Constitution is the law of the land; why is "enforcement" of it now a bad thing?  The Advocate's position is that Jindal and Louisiana republicans are just supporting this bill out of pure politics rather than any concern over constitutional intent which is quite an assumption to make without more evidence.  The Advocate says Jindal's intent to sign the bill, should it pass, is "motivated by politics rather than constitutional law," which is simply ridiculous. Support of the citizenship standard is about nothing if not constitutional law.

From the Advocate's point of view, Jindal's failure to disavow the entire process shows something like a lack of respect for Obama, or something:

Our system does not depend merely on laws, even the Constitution. It depends on an atmosphere of mutual respect, for the office if not the person or the views. By lending his signature to a birther bill, Jindal would put his politics above his personal obligation to make America’s political system work. Above the respect he ought to show to the president’s person, even if he disagrees with the president’s actions.


So, by signing this "birther bill," Jindal is disrespecting Obama.  Which is so much more egregious than violating the Constitution.  Jindal should vow to veto the bill because he respects Obama so much.  Riiiight.

The comments following the editorial are amusing in their own right.  The first one cites racism, naturally.


Regardless of one's position on the birther issue, it seems the Advocate misses the mark and does, in fact, reduce the whole issue down to just politics rather than constitutional intent.  The Louisiana legislature convenes tomorrow and this will absolutely be one issue to watch.
Posted by Pat Austin Becker at 6:33 PM

I don't see it as disrespect. I see it the same way I see political people or even ordinary people who write articles or stand up in front of cameras and spout this and other lies. Some day, if we the people care to, there will be a record to recall what was said, when and by whom.

I figure history is on the side of those yackers because Americans have poor memories.