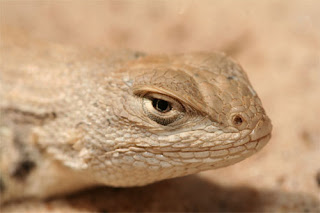 Specifically, the Dunes Sagebrush Lizard. That’s the latest more-important-than-people critter being used to lock-up resources in the name of planet Earth. The drilling moratorium didn’t cause enough pain, so onto the Endangered Species Act - known at the Sierra Club as “Ol’ Reliable” - to make certain Texas has lizard-filled poverty.
Lizard or livelihood? That’s what’s at stake. And the pro-poverty Earth Firsters stratifying government can’t have both. If it determines that the lizard is indeed endangered, the Fish and Wildlife Service will shut down the most productive oil counties in Texas, ban roads, and slow farm activity, as it “studies the ecosystem” for up to five years.

Because the moratorium wasn't bad enough.


According to USFWS, the dunes sagebrush lizard s in danger of extinction across its entire range due to ongoing significant threats of habitat loss and fragmentation. These threats include oil and gas activities, as well as herbicide treatments. The removal of shinnery oak and creation of roads and pads, pipelines, and power lines for oil and gas development is a measurable factor impacting the dunes sagebrush lizard, according to USFWS.

And you just thought gas prices were high.

Posted by Pat Austin Becker at 6:24 AM

Conservation is always the correct choice! We are on this earth with lots of other breathing creatures and must protect them! We have a range of native reptiles in Australia that are endangered and it's paramount we do whatever it takes to look after them.