On the Budget Battle and Shutdown 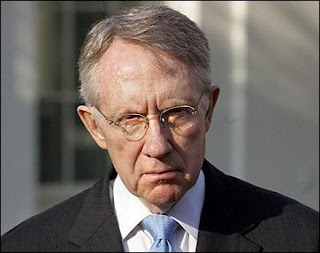 I'm both fascinated and disgusted by the looming government shut down and the budget battle.  More disgusted than fascinated, actually.  To see Harry Reid stand up on the Senate floor and blast Republicans for this current situation is ...  well, the most bizarre thing I've seen lately.

Correct me if I'm wrong, but isn't this a problem created by the Democrats?  Didn't they have full control of Washington before November and didn't they opt out of passing a budget?  They just bailed on it.  Kicked the can down the road.  And now they're bitchin'?  Seriously?

Meanwhile, weeks after the fact, Putz in Chief decides to vent his ire over the whole situation and become "involved" (between vacations, trips, golf, and campaign stops).

Yes, I'd say more disgusted than anything, but it is fascinating to watch.  Like a bug.
Posted by Pat Austin Becker at 6:21 AM

I'm not all that fascinated. I'm mad because we hired these legislators to legislate and all they do is play political games with each other trying to manage our personal lives while the country isn't managed.

The Democrats couldn't be bothered with working out a budget, because they were too busy cramming Obamacare down our throats.

I agree with Charlene. They should just do there job and stop bickering around.