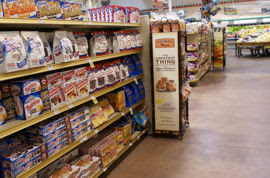 Yesterday afternoon I was in the grocery store picking up a few little things on my mom's shopping list.  Some milk, bread, hair spray, nothing much.  I got to the checkout line and was behind a couple of guys buying a loaf of bread and two sodas.  They were paying in pennies, dimes and nickels.  One lane over a customer had the store's weekly ad in her hand and was arguing with the cashier about the cost of an item.  When I finally moved up to check out I visited with the cashier as she scanned my items - she's been there about thirty years and I always go through her line when I can.

"People are tired," she said sadly.  "Cranky.  Prices keep getting higher and higher everywhere they go and they're tired."

She's right about that.  I see it.  People are definitely cranky.  Steve and I were driving somewhere last week, stopped at a red light, and we were about three cars back.  When the light turned green the guy in the lane next to us started screaming, "Go!!!  It's not going to stay green for ... ever! "  Yeah, so lots of us have temper tantrums when confronted with ignorant drivers (and there are plenty of them), but I think it's true that people are testy.

Jeffrey Lord at American Spectator hits on the issue of rising prices in his column this morning to explain why Obama is a "political goner" in 2012:

You can get away with a lot of things as president and blame them on other people. For Obama its George Bush or now the oil companies or also now those evil corporations or… well… yada yada yada. But when average Americans begin to understand that Obamanomics is directly responsible for a 28 cent rise in the price of milk (with over a year and a half to go to the 2012 elections), there is going to be political hell to pay. And the buck, so to speak, stops, as it always does, with the president of the United States.

It's all related to the cost of gas, of energy.   Gas prices during Obama's tenure has nearly doubled and that's reflected everywhere you go.  He can't blame this one on Bush.  This is when the rubber meets the road; this is when the Average American starts paying attention:

Paying an increase of 28 cents for a gallon of milk inside of less than four months? This is the language understood by average Americans too busy with daily life to pay much in the way of attention to the economists, journalists, and politicians.


And they' re getting cranky about it.  They're going to look for someone to blame and someone to answer for this.  It's going to get worse as summer approaches and the summer driving season kicks in.  Gas prices always rise then.  And then comes hurricane season.  Up, up, up.


And Obama's answer?  There's no "silver bullet" to bring down gas prices.  Does that satisfy you?

have you also noticed the traffic noise after rush hour has dropped way off?

I live in a suburb of Orlando and it is very evident.

SO what IS the "silver bullet" you have in mind? Drill here, drill now, drill more, blah, blah, blah???? The U.S. oil reserves, if reserved exclusively for domestic usage, would last about 2.5 years. We're the Circle K of oil production in the world. Get a clue!!!

Tony, you are wrong. Oil is not all we "drill" for -- it's methane (natural and landfill,) and natural gas, and even tar sands and oil shale -- there's more to "drilling" oil than "oil." And here in Louisiana we understand this (they do in North Dakota and Wyoming now too, where they don't "Drill" for oil but just scoop it up as sludge. For we're sitting on some of all of these "oils." Not only that, sir, but we are the "Saudi Arabia" of coal -- we simply have more of the stuff than most of the world combined. And it can be used in numerous ways. In fact, the USA is probably the most energy blessed place on earth. Oil is but a part of it. (And we haven't even begun to drill past the Mississippi/Alabama line in the Gulf -- as if the oil just stopped at that imaginary line.)