The Dog Ate My Christmas Present 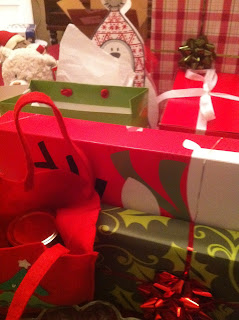 I'm going to try to live-blog the debate tonight.  I'm still pulling Christmas together for the family gathering this weekend, but I want to try to watch this debate. I've been wrapping, baking, and cleaning like a madwoman.

I was in the middle of teaching Act 4 of Julius Caesar when I got a text message from The Teenager.  (See photo below).  I'd made the mistake of thinking the two year old Lab would not eat the presents I'd put under the tree.  Wrong.

The next 48 hours are going to be filled with more cleaning, polishing, setting things up, and lots more cooking.  But, the debate looms.  I want to see this one.

One thing we should all keep in mind is that Iowa doesn't seal the deal.  It seems that so many pundits are staking everything on Iowa but so much can change during the course of this campaign.  Remember, in 2008 it looked like Hillary was going to be the nominee for the longest.  Heck, Ron Paul might very well win Iowa.  Just sayin'....

If you missed the National Review's Not-Newt recommendation: 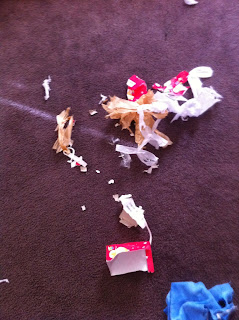 We fear that to nominate former Speaker Newt Gingrich, the frontrunner in the polls, would be to blow this opportunity.

Gingrich has always said he wants to transform the country. He appears unable to transform, or even govern, himself. He should be an adviser to the Republican party, but not again its head.


The NRO editors suggest another look at Romney, Huntsman, or Santorum.

There's a long way to go yet.  While Iowa is important, it's not the end of the line.  There's still a lot of changing ground under us.

Check back later for live-blogging.
Posted by Pat Austin Becker at 6:34 AM

A few weeks ago I had to go to supply and say "My doggie ate my body armor." Serious. left the trauma plate (the small plate that fits over the mid-chest) out on a day off and Beth called a bit later, "Mike, Elmer chewed you plate.....". I still love him and thankfully supply had some spares.

I'll try and catch your blog coverage but criminals can be so inconsiderate of a man's schedule!

I guess when the National Institute of Justice tested the protection levels of body armor they didn't think about bad dogs.

I think you're steel on target there!