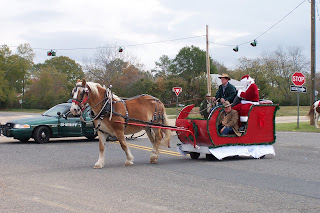 Steve and I headed south to Grand Cane, Louisiana today for their fifth annual Pioneer and Trade Day.

Grand Cane is one of the nicest, friendliest little towns in this part of the state, and boy do they know how to put on a celebration!

It seems like they've always got something going on there.

Festivities kicked off at 10:00; we were a little slow getting there (my fault) but got there in time to see the kickoff of the Christmas parade. 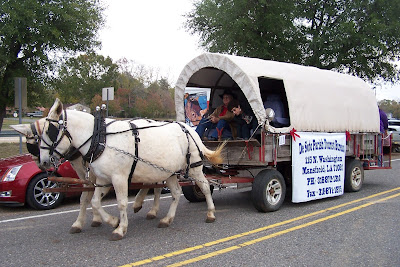 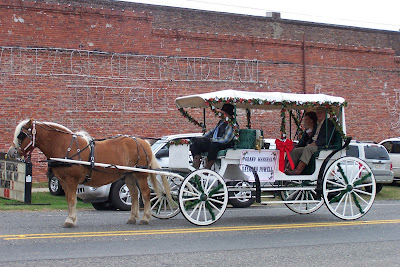 There were lots of kids involved riding their own horses, and there were plenty of kids lining the street to catch candy. 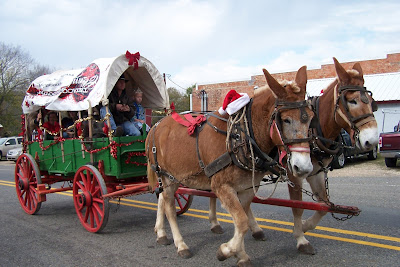 Santa was even in attendance with his horse drawn sleigh.

Our first stop after the parade was finished was The Raven Bookstore.  Quite the savvy bookseller, Vanessa had Michael Henry books in stock! 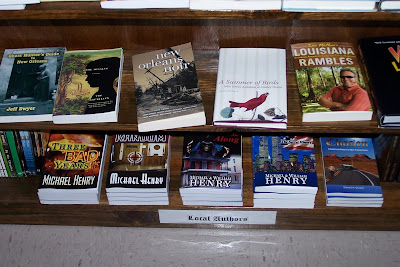 There was a massive book signing in progress and I was pleased to run into C. L. Bryant there: 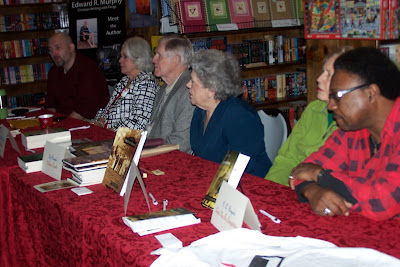 The shop windows were decorated for Christmas; the Santas are by woodcarver Joe Hartley: 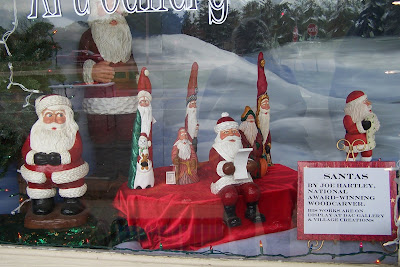 In the Town Hall, Severn Doughty was set up with a display of pioneer tools and other items.  Steve was interested in the carbide lamps and Mr. Doughty was busy explaining local history and the function of all the tools to the many visitors who stopped by: 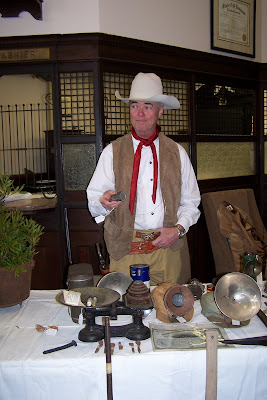 The Town Hall also had a display of arrowheads and antique badges: 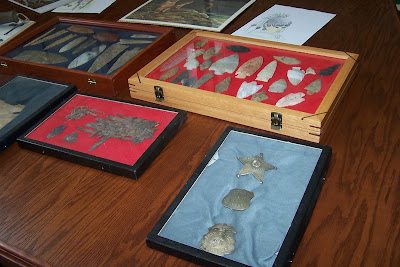 I thought these were cool: 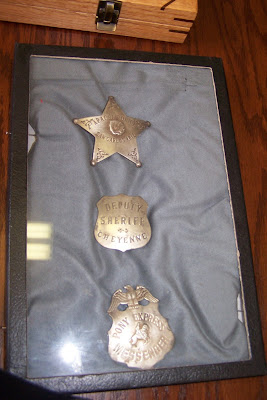 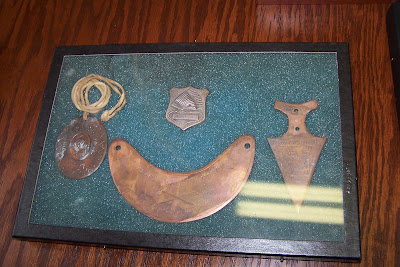 From there we headed over to Suzanne Brossette's Village Creations where she was doing a brisk business.  We bought a couple of little things and then headed around to the park where the craft and food vendors were set up.

A band was set up inside the theater playing classic rock favorites and a bluegrass combo was in fine form in the park pavillion: 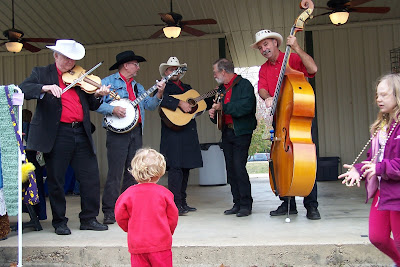 Santa was set up in the gazebo with a long line of children hoping to get their requests in: 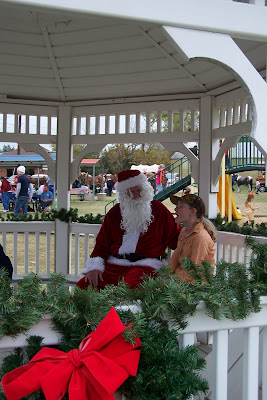 There were a few dogs, too.  This chihuahua was interested in food!: 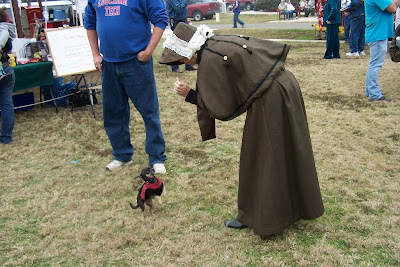 And there was plenty of food.  When we walked up I told Steve, "It smells like Mardi Gras," because of all the smoky, wood smells wafting across the park.  Take your pick from turkey legs, bar-b-que sandwiches, ribs, pulled pork sandwiches, fried crawfish pies, fried fruit pies, hamburgers, nachos, and more.

We ate plenty, too.  We started with sausage on a stick: 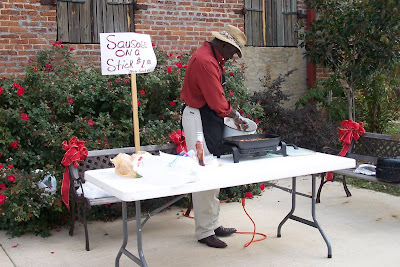 Later, Steve got a pulled pork sandwich and I got a fried crawfish pie (AND a fried peach pie!) 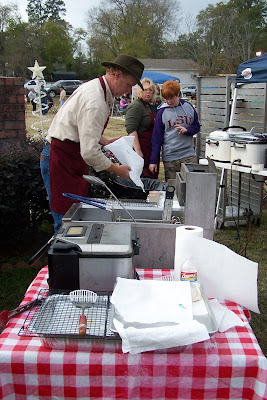 We also sampled plenty.  Steve picked up three jars of goodies at this tent, including candied jalapenos and some salsa: 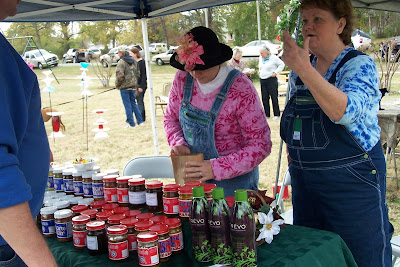 Joe Hartley was set up with his woodcarvings: 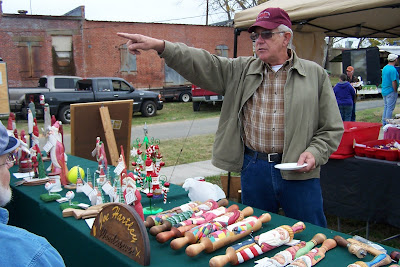 And this lady had some interesting lighting ideas: 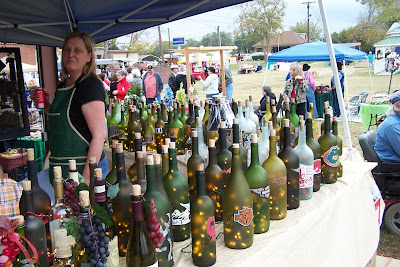 And just look at these cute kids having a grand time in the park on a Saturday: 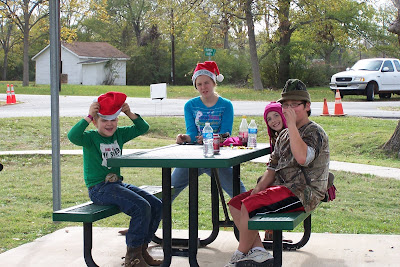 Activities in the park shut down around 2 and so we walked back through the shops once more; we picked up a few things at The Raven and then headed back home in time to watch the LSU game.

If you're in the area, put Grand Cane on your list of day trips.  For a little bitty town, they've got huge community spirit and heart and every one we've met there is as friendly as can be.  It'll stay on our list of things to do!

And here's a little music from the festival for you from The Blake Brothers Bluegrass Band (note the cute little guy in the front!):

Wow, that white jenny co-pulling that covered wagon from Mansfield looks like she's about 13½ months along. Never seen one being worked that far gone before, but she looks fine. Great pics.

Well, now I'm sad that we don't have this kind of entertainment in my Belgrade. Looks like it was a really good day.