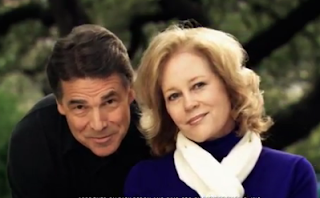 The conservative blogosphere is beginning to eat its own, it seems, in a microcosm of the state of the Republican party as a whole.

Should we fall in line behind the bland, flip-flopping Mitt Romney with his RomneyCare baggage or the cranky, bristly, erudite Gingrich who has so many facets that invite attack?  Is it too late for Rick Santorum?  Will Bachmann make a comeback?  Ron Paul?  Out of the question.  Yet, each of these candidates has supporters.

The Republicans have been struggling for quite some time to reconcile the conservative side with the "big tent" side and that argument is playing out quite clearly in the nomination process.

Several conservative bloggers have come out this week for Rick Perry.  The run down:

Ace of Spades came out on the 19th with a lengthy endorsement of Perry.  A snip:

America, and especially the Republican party, has long favored elevating governors to the presidency. Governors are, after all, the presidents of single states. They have nearly the exact same duties and functions (including even maintaining and controlling the state national guards). They have similar executive powers and set the agendas for their respective legislatures. In the case of border states such as Texas, they even require some foreign policy making duties.

No job in the world really prepares someone for the Presidency. But one job, more than any other, comes fairly close to doings so.

So Rick Perry cannot handle high executive office?  Then how is it he's been doing just that for 11 years?

(And if you want to object that Texas has a weak-governor system, with a lot of power vested in the lieutenant governor position -- well, they claimed that about George W. Bush, too. And claimed that Rick Perry actually was doing all the hard stuff in his then-position of Lieutenant Governor. So wherever the power lies in Texas, Perry has handled it, in both jobs.)


It's a quite lengthy post and you should read the whole thing.

A group of Red State bloggers also have come out for Perry:

Perry is well-prepared by experience and temperament to take on the presidency. He’s the longest-serving Governor in the history of the nation’s second-largest state. He’s a calm, steady hand at the helm, with strong Christian faith and a stable family. He’s come up from humble, rural roots, served his country overseas in the Air Force, and made a living in the private sector as a rancher and cotton farmer. Perry is studious and deliberate in making decisions, and resolute without being unduly stubborn in carrying them out; when he’s erred, as with the Gardasil controversy, he’s backed down, but when he’s right he sticks to his guns. He’s been tested by crises in office, including Hurricane Rita in 2005 and Hurricane Ike in 2008 (as well as the 300,000 refugees sent into Texas by Hurricane Katrina) and 2011′s wildfires. And he’ll appoint conservatives aplenty to his administration: a look at who he will owe his nomination to, if he pulls this out, tells us that. Armed with conservative convictions and surrounded by solid conservative advisors, Perry has the necessary experience and temperament to get the job done.

Perry has clearly been a good Governor. He has not, however, been a great candidate. His early campaign was too Texas-centric. We all know about his debate performances. He has positions I disagree with. And his campaign has made some steps I also disagree with. But, I believe he could be a great President. He understand the limits of government, the power of the private sector to create prosperity and the dangers government policies pose to that. And, I believe he understands these principles in a more fundamental way than the other candidates.

Over the next few years, America will face some existential questions. Will American exceptionalism endure or will we slip into a quasi-European welfare state in permanent decline? Our present trajectory is unsustainable. Even with a Republican House and, most likely, a Republican Senate after next year, the GOP in Washington doesn’t seem quite up to the task of reclaiming that “shining city on the hill.” They can’t quite get beyond repainting a house whose foundation has cracked. We will need a President who is a strong leader with very grounded conservative convictions to navigate our way back to prosperity. One who understand that Washington has already assumed too much power and that future economic growth and personal liberty requires rolling back much of that power.

Rick Perry is that man.


Don Surber has NOT endorsed Perry but he has noted Ace's post and calls Perry "the last conservative standing":


Rick Perry needs to stop trying to work the social issues and instead relax, be himself and have fun with the whole campaign. He seems to enjoy pressing the flesh and of everyone running, including President Downgrade, Rick Perry is the guy you want to have a beer with because he’ll pay and it will be a Lone Star. I can see voting for such a man.

That said, I am not endorsing anyone at this point.

But on a scale of conservatism with 10 being Reagan and 1 being Carter, I give Rick Perry a 9. Sure, the HPV vaccine was a mistake but it was one made for the right reason: To save lives.

Pundette has not offered an endorsement yet, either, but she's had one foot on the Perry train, like myself, since day one. She offers this:

I have a dream: As the Newt balloon continues to deflate, it will come down to a choice between Perry and Romney. A comparison of their records will yield a clear choice for conservatives.

That said, Stacy McCain is very much NOT on the Perry bandwagon:

You know, I remember attending a speech Labor Day weekend where somebody talked about the problem with “crony capitalism.” Looks like there’s a sort of Solyndra thing going on in the Lone Star State.

But never mind me: I’m just a “low-information” guy, not part of the AOSHQ/Red State Rick Perry Blog Bandwagon...


In fact, Stacy seems rather befuddled that anyone would even consider Perry.

SIGIS is not one of those big traffic blogs like Red State or Big Government and my endorsement likely won't carry much weight with anyone.  But I've never been shy about going on record.

When the Louisiana primary rolls around in March, I'm pulling the lever for Perry.  My reasons coincide with all of those previously stated by the above cited bloggers.  I can't vote for Mitt Romney.  If ends up being the nominee, I'll have to vote for him.  But as long as I've got a choice, I'm going with the conservatism of Perry.  I like Bachmann but she doesn't have the executive experience of Perry.

The main case against Perry, as far as I can tell, is that his debate skills are not as polished as some of the other candidates (although he has improved drastically), and the Gardisil mess.  If, as Newt contends, those in public service for a long time learn from their mistakes, I'm willing to believe that Perry learned from that one.  He says he has, and I believe him.  The other case against Perry is apparently that he sounds too much like George W. Bush and that America may not be ready to elect another Texas governor.

What America needs is a true conservative and I believe most Americans are ready to vote for one.  I think a dust bunny could beat Obama at this point.  Can Rick Perry stand up to the billion dollar Obama war chest and the sneaky machinations of ACORN other dirty dealings?

All I can say is don't mess with Texas.  Rick Perry will make a very formidable opponent.

Added:  The Daley Gator endorsed Perry too, which I missed.  Sorry, Doug!

Sara Palin has said that it is not too late for her to announce. It may be too soon to make an endorsement.

As a Texan who supports Rick Perry, thank you for your endorsement. It matters. He'll make a good President. And he'll help us get headed back on the right track: back to States making their own decisions, and Washington taking care of its true responsibilities.

Anonymous, I'd like for Sarah to run for President in 8 years. Mrs Palin is a gift from God for our country. For now, I think as soon as the elections are over we are going to need her to develop the next set of candidates for the next mid-term elections. Restoring truly representative government in America is going to be a hard, exhausting, lengthy slog, and we need Sarah's energy and inuitive direction to help us develop new leaders and stop the revolving door.

Great pat! But, I must say, I endorsed Perry before any of these folks, where is the love for the Gator? SIGH!

I will vote for Mitt in the primary only if it looks like Newt is going to win by the time it gets to Georgia.

Sadly, it reminds me of '08 when up until the primary, I supported Fred Thompson, but ended up voting McCain in the primary because I didn't want Huckabee or Romney to win.

Anyway, I hope more people will start supporting Perry in the near future. I'd love for him to do well in Iowa. People look at Mitt & Newt and groan, but no votes have been cast yet. Don't let polls and the media choose your candidates for you!!

I am a Texan (transplant from Louisiana) and I support Rick Perry. He's been a wonderful governor. As for the Guardasil debacle, there was an opt out. That said, when the citizens rose up against the mandate, which was overturned in a vote by the legislature if I am not mistaken, Perry let it slide. It is as he said, his heart was in the right place, but he went about it the wrong way. Texas has a thriving economy, our land values have held up better than most of the rest of the country's and there are good jobs to be had here.