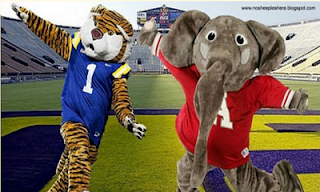 LSU will play Alabama for the BCS championship on January 9.

My friend Carol over at Political Clown Parade has an extensive summation of the situation and the controversy around the matching.  Seems some folks are upset that it's an all SEC deal.

Carol is dubbing this game "Slobberknocker Redux" and I think that's probably apt.

We are reprising our bet from last year; originally the bet was a case of Sam Adams, but when LSU beat 'Bama, and I told Carol instead of shipping beer to Shreveport just donate to her favorite charity, Carol ponied up $100 to the Wounded Warrior Project.

So, when the Honey Badger has his way with Big Al and Bama is left wondering what happened to them, Carol will once again fork over $100 to the Wounded Warrior Project!  (And if, heaven forbid, LSU loses, I'll do the same.)

Bless Alabama's heart, they're like an ex-girlfriend that just needs to give it up! It was over on November 5th, and January 9th will just bring more heartbreak!
(And my word verfication is "ferus', how's that!)

I am afraid that Carol will have the last laugh in January.

I've heard that before. I don't know why everyone thinks Alabama has improved so much since November 5th. Hide and watch.