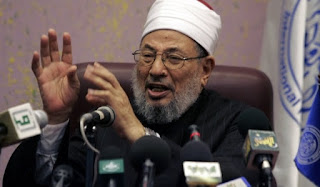 Andrew McCarthy is sounding the alarm:  Obama is preparing to surrender Afghanistan back to the Taliban:

The surrender is complete now. The Hindu reports that the Obama administration has turned to Sheikh Yusuf al-Qaradawi, the Muslim Brotherhood’s leading jurist, to mediate secret negotiations between the United States and the Taliban.


ABC News reported yesterday that the Taliban is preparing to open its first official office in Qatar:

The office is expected to open as early as the next few months in Qatar, the officials told ABC News, and facilitate negotiations with the Taliban that will include unprecedented local ceasefires in Afghanistan and the transfer of Afghan prisoners from American prisons — even though they are labeled “high risk” to the U.S. and associated with the death of a CIA officer in 2001.

John Hinderaker at PowerLine points out that it would be a real "coup" for Obama to run for re-election on the boast that he's ended two wars, especially as unpopular as the Afghanistan incursion has been.

According to the Hindu report:


Earlier this month, the sources said, Mr. al-Qaradawi helped draw a road map for a deal between the Taliban and the United States, aimed at giving the superpower a face-saving political settlement ahead of its planned withdrawal from Afghanistan which is due to begin in 2014.

In return for the release of prisoners still held by the United States at Guantanamo Bay, the lifting of United Nations sanctions on its leadership and its recognition as a legitimate political group, the Taliban was expected to agree to sever its links to transnational organisations like al-Qaeda, end violence and eventually share power with the Afghan government.


Yet for Team Obama to recruit Sheikh Yusuf al-Qaradawi is stunning.  McCarthy has much more on him, referring to him as the "most influential Sunni Islamist in the world."  McCarthy also points out that in 2003 he issued a fatwa calling for the killing of American troops in Iraq.

Is this the best guy we can find to support American interests in the region?

McCarthy has much more on Qaradawi:


Debra Burlingame linked to this video in her Facebook feed of Qaradawi spewing vile antisemitism and vowing to kill Jews "even if in a wheelchair."  He is bent on the destruction of Israel.

This is who Obama calls upon to bring peace to the region?

McCarthy sums it up best:

After thousands of young Americans have laid down their lives to protect the United States from jihadist terror, President Obama apparently seeks to end the war by asking Qaradawi, a jihad-stoking enemy of the United States, to help him strike a deal that will install our Taliban enemies as part of the sharia state we have been building in Afghanistan. If the Hindu report is accurate, the price tag will include the release of Taliban prisoners from Gitmo — an element of the deal Reuters has also reported. The administration will also agree to the lifting of U.N. sanctions against the Taliban, and recognition of the Taliban as a legitimate political party (yes, just like the Muslim Brotherhood!). In return, the Taliban will pretend to forswear violence, to sever ties with al-Qaeda, and to cooperate with the rival Karzai regime.

It would mark one of the most shameful chapters in American history.


It nauseates me.
Posted by Pat Austin Becker at 1:36 PM

"John Hinderaker at PowerLine points out that it would be a real "coup" for Obama to run for re-election on the boast that he's ended two wars, especially as unpopular as the Afghanistan incursion has been."

At one point, people cheered Neville Chamberlain for achieving "peace in our time" too.