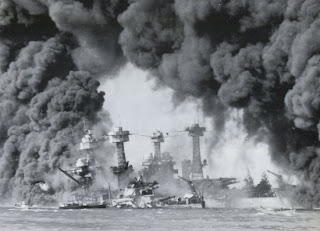 As we remember Pearl Harbor today, skip over and read Jim Lacey's piece at National Review:

In those dark first months after the Pearl Harbor disaster, it was not apparent to many that Japan had already lost the war. For, despite sinking much of the U.S. Pacific Fleet, the Japanese had missed a couple of crucial targets. Foremost among these were the huge oil-storage facilities on Oahu. Their loss would have delayed the American counterattack in the Pacific by as much as a year. One can only imagine how much more costly the conquests of Tarawa, Saipan, Iwo Jima, and Okinawa would have been had the Japanese had another year to fortify them.


The costs were certainly high enough as it was.

There are a few survivors still among us and some are still telling their story.  Listen to them.

The Washington Post has a story of remembrance ceremonies.

There are some great memoirs to read about the war in the Pacific:

I've told friends of mine to go to the Nation World War II Museum in New Orleans soon because a lot of the displays are manned by veteran volunteers. What they add to the display is invaluable. And unfortunately they are passing quick.