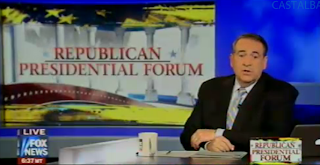 Ken Cuccinelli asks Newt why anyone should trust he won't advance big government measures.  Newt again says the ad he did with Pelosi was "the dumbest thing" he's done in years.  He says he never supported cap and trade.

Interrupted by a phone call from my mom; she's excited about the LSU victory.  Off the phone with her in time for a commercial.

Fine blogger I am.  I've missed the first twelve minutes.  Like there aren't a million more debates before this is all done.

And I stand corrected:  it's not a "debate," it's a forum.  The candidates appear alone on the stage with the interviewers.  I wonder if it's like the Miss America pageant when the other contestants are off stage and can't hear the answers of the contestant on stage.  Weird.

7:15:  Scott Pruitt asks about national problems that should be the domain of the states rather than government; education is the first thing out of Newt's mouth.  I agree with him on that one.  He advocates a Pell grant for K-12 to give power to the parents rather than the government with regard to education.

Pam Bondi asks if it's wrong for the federal government to intrude over the state's authority with regard to education.  Newt:  "It's wrong."  He advocates charter schools.

Newt uses the word "radioactive" to describe Pelosi when a follow-up question to his couch ad comes.

Are there any parts of the Patriot Act that run over the rights of citizens?  "No."

Santorum discusses parents of children that don't marry so they can receive more government assistance dollars as he discusses entitlement programs.

I'm listening to Santorum but honestly, he has no charisma or draw for me.  He's nice enough, and sincere enough, but he's not catching me.

His discussion on entitlement reform is quite valid, however.

On abortion and marriage: "You can't have 50 definitions of marriage in this country."  The definition needs to be uniform, he says.

Bondi has an EPA question citing the numerous policies of the Obama administration.  What principles would you follow with regard to environmental regulations?  Santorum refers to the "Endangered Species Act" as poorly drafted and overly broad.  The left is "the best" at broadly written statues, he says.  We need to re-evaluate these acts when they come up for re-authorization.  We need "to fix them" and have Congress define them and not the regulators.

Scott Pruitt asks why the Founders allowed for separation of powers.  Answer:  the federal government was always intended to be limited.

The courts are not the only arbiter of the Constitution, he says.

Question about how he can unilaterally overturn Obamacare.  He's going to put people in place that share his philosophy in HHS and other agencies.  He's going to use Executive Order to overturn as much as he can.  Cuccinelli has issues with Perry doing it through ExO, unilaterally, it seems.  Perry wanders a little and Cuccinelli pulls him back.  Perry says "We can stop parts of it" through Executive Order.

Bondi:  Right to Work question.  Do you favor passing a national Right to Work law?  The states have the responsibility of doing that, Perry says.  "States compete against each other...that's how we get stronger as a country."

"Get the federal government out of makin' one size fits all...then people can vote with their feet, and that's what they do." 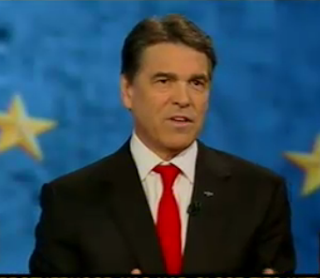 Pruitt:  Should the federal government be required to reimburse states for expenses related to immigrant health care, incarceration, etc.  Perry:  "We send 'em a bill every year."  Cites his experience as governor with immigration and goes into enforcing border security.  Perry repeats his usual talking points:  "Within 12 months from inauguration the border will be secure."

Another break.  Lawsy!  There are a lot of breaks!

Does the federal government have an obligation to intervene when parents fail with kids education?

Nope.  He says he'd do away with the Dept. of Education and flip it back to the states.

What does the term strict constructionist mean to you?  Alito and Roberts, he says.  "Not a legislator in a robe."  He wants term limits on Supreme Court justices and acknowledges it would take a Constitutional amendment to do that.

He says the justices he's placed in Texas have been strict constructionists.

This is a good forum for Perry.  He's more relaxed.

A question about Roe v. Wade.  He cites what they've done in Texas about sonogram law, etc.  He wants to protect life in the states.

Perry whips a constitution out of his pocket.  Read it, he says.  Don't add anything to it. 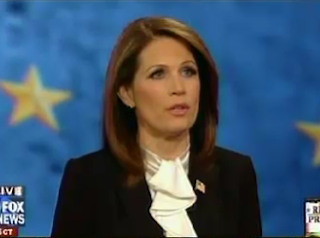 She calls Obamacare a huge social engineering playground for the left.  We have one chance to stop it, and that's this election.

Question on deporting all illegals and how expensive it will be.  How are you going to do that?

Question about eliminating the Dept. of Education.  She, too, would abolish it.  We need to have a full scale repeal of the education law, she says.  The burdens and the mandates by the federal government are strangling our schools.

How would you deal with air pollution that crosses state lines?  We can't have the current EPA, she says.  They've become a government unto themselves.  A lot of these pollution between states issues can be negotiated, she says.  When reminded that one can't compel without legislation, she says it needs to go back to the states and there may be a need for new legislation.  "I'm not opposed to the federal government" dealing with some of these issues.  Basically, the EPA needs to be reigned in, she's saying.

The worst legislation in the last 50 years, she says, was the Kelo decision on eminent domain.

What are the domestic responsibilities of the federal government?

Enforcing the Bill of Rights, securing the border, and providing a sound currency. 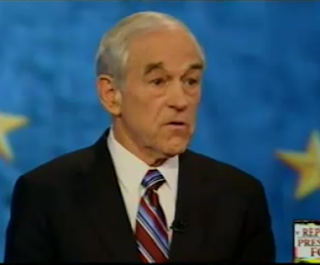 Paul says there are laws for violent acts and you just can't pass enough laws to stop all violent acts.  "It's not a lack of laws that's our problem," he says.  We need laws at the state level, he says, not nationalization of law enforcement.

What would you call the attacks in New York City?  "It's an act of violence," he says.  When pressed, yes, he says, it is an act of terrorism.  "We should understand that whole problem," though he says.  More guns won't make us safer; we have to understand the motivation, he says.

A question on the fed.  Paul says it wasn't the lack of regulations that caused Enron.  Advocates free market and less bureaucrats.

He says the sovereignty of the the people trumps everything else; states next, then the federal government.

If you could suggest every American read one book, what would it be?  Excluding religious materials, he says, read a book called The Law by Bastiat.

Romney is up next.

Mitt begins by thanking everyone.


Says the EPA is out of control and that they're advocating solar and wind too much.  We need a government that helps the private sector rather than limiting jobs; cites fracking.  He would have the EPA stop oversight of fracking and other job crushing regulations.  Should go back to the states, he says.  He'd also get EPA out of regulation carbon emissions.

When Obama throws RomneyCare up at you, what will you say?  Romney stands by RomneyCare but says Obamacare goes way beyond that.  Obama isn't just worried about people without insurance, he says, but is interested in taking over all insurance. 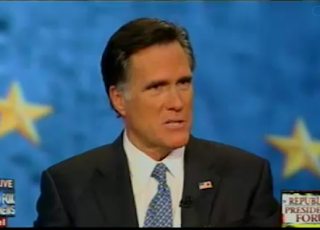 Yet RomneyCare does affect all those insured, he is reminded.  People got private insurance, Mitt says.  For most people in his state, nothing changed.  The real objective is getting down the cost of health care.

On the federal government in education:  He supports aspects of NCLB.  (He lost me there.)  Romney says the unions are killing education.  "Education should be held at the local level," he says.  He says NCLB was an attempt to stop the unions.

Romney says he looks at most of those programs for the poor and sending them down to the states.  "Take care of your own poor."

On Supreme Court appointments:  what is a strict constructionist?  Romney wants people who recognize that their job is to protect the Constitution rather than depart from it to put in place their own views.

On immigration:  If the government won't secure the border, states should take action.  He cites what he's done as governor.  "We have to recognize that the federal government has to step up and do its job," he says.

On labor law:  We need to completely revamp the National Labor Relations Board.  States should put in place right to work laws.  He would not propose getting rid of labor law but return power to the states where you can.

Up next, all six candidates with final thoughts.

Final update: Each candidate gets one minute.

Mitt:  This election is about what kind of America we're going to have and he cites David Brooks.  Lost me.  I don't want my president taking advice from David Brooks, thank you.

Perry:  Asks for a second look; he wants to "get America workin' again," and wants a part-time Congress.  Is running because "our country is in trouble."

Ron Paul:  Things are a mess because we turned the Constitution on its head.  We've been careless with it and the federal government is too big.  The states are suffering the consequences.  We have to revisit the principle of nullification.

Newt:  Thanks the moderators.  This might be the most important election since 1860 he says.  If Obama gets re-elected he will think it vindicates his Saul Alinsky radical agenda.  He asks voters to be "with" him rather than "for" him.

Bachmann:  This is the most important election of our lifetime.  (Only if you've been alive since 1860, according to Newt.)  She promises to unite the country and grow the economy.  Her experience as a tax attorney qualify her to do that.  Hunh?  We have to stand together.

Santorum:  Thanks Huckabee for being a "great warrior" for faith and family.  We have to tackle this huge behemoth of federal government.  The moral decline of America is apparently the root of all our problems.  "I will not surrender the values of this country."

Huck is going to offer his final thoughts but I'm done.

It was an interesting format but overall I'd say the questions were generally softball.  As Jacobson pointed out, nobody was really challenged.  Perry wasn't prodded on Gardisil, Santorum wasn't questioned about his record or why he suffered a crushing defeat in his state, and I'd have liked to see a question to Bachmann about the vaccination makes your children retarded comment.

Oh well.  Another day, another debate.

*Sigh*. Sorry, that was my reaction, so no brilliant comment today!

I feel like the republicans are trying to lose this election.