Do You Write Notes in Your Books? 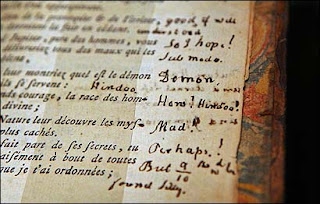 Do you write in your books?

I've been thinking about books a lot lately; maybe it's the New Year and the inevitable "read more" resolution. It's partly the articles I've been reading about the Rove/Bush annual reading contest (one of those articles listed many of the specific volumes George W. Bush and Karl Rove read and then I examined many of those myself and ordered a few.) It could also be the winter-nesting-reading cycle I get into.

At any rate, I've been thinking about books. When I was a student in college I was a big fan of the highlighter. As I read texts I would highlight voraciously. Looking back at the few of those texts that I kept I can see that when I was a freshman I highlighted with a great deal less discretion than I did much later. "What the hell did I highlight THAT for?!" As a more "mature" student I discarded the highlighter for the neater, and less permanent, light pencil underline, with marginal notes of my professor's brilliant comments and analysis.

Sometimes I print articles off the internet (I hate reading long texts online) and I will highlight those. Sometimes I'll forgo the highlighter and underline, or write margin notes. I remember specifically one Obama speech, before he was even a presidential candidate, about which I wrote copious questions and incredulous comments in the margins.

As an adult reader and a collector of books, I now find that I can not bear to write in a book. It's not even so much that I collect RARE or priceless books (although I do have a few treasured rarities that are quite antique) - many are even softcover and easily replaced. I find myself now resorting to the sticky-note method. By every reading spot in the house you will probably find a small pile of various sizes of sticky notes and a mechanical pencil.

My copy of John Adams, by David McCullough, is nearly twice as thick as it's original size because of all the sticky notes. I know this is bad for the spine and the binding of the book. Most of my books don't have as many notes as the Adams book, but as I'm reading Heroic Conservatism, for example, I find interesting quotes or salient points that I want to make note of, remember, or possible quote from. Sticky note.

It brings to mind, speaking of John Adams, what David McCullough pointed out as he discussed the voracious reading habits of both Adams and his friend Thomas Jefferson. Both men read a crazy number of books and the classics often in their original languages. Adams had over 3,000 volumes in his library, and he didn't exactly have Barnes and Noble in his neighborhood, or even Amazon. Books were precious items back then! In 1815, Jefferson sold over 6,700 volumes from his personal library to the government to replace the collection of the Library of Congress that was burned when the British invaded the Capitol.

McCullough writes, "Unlike Jefferson, who seldom ever marked a book, and then only faintly in pencil, Adams, pen in hand, loved to add his comments in the margins." In that regard I am much more a Jeffersonian reader than like Adams. In Mary Woolstonecraft's French Revolution, Adams wrote some 10,000 to 12,000 words, depending on your souce, in the margins (he disagreed with almost everything she said.)

A couple of years ago there was an exhibit in Boston showcasing over 3,800 volumes of the Adams collection, some in glass display cases with his marginalia visible (pictured above.) For my money, his notations and commentary would be absolutely as interesting as the texts themselves!

So what about you? Do you write in your books?

in my self help books i did, and in some books i was studying in lit class in college/high school

i lent a book once to one of Isabel's boyfriend, the published writer, and it was my favorite book from school and he asked to read it- and when he returned it, it was written all over (WTF) and clearly had water damage :|

I'm really a Jeffersonian. I leave sticky notes and scrap paper in books, but don't write in those I consider literature...even if Stephen King.

However, technical books and professional journals I write in, yellow hilite and dog ear all the time.