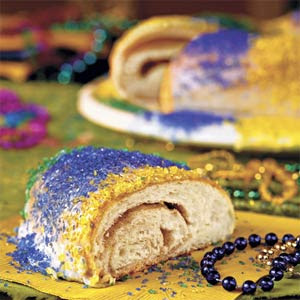 It's Mardi Gras season in my neck of the woods. One of the first things I like to do each year is to go down to Julie Anne's bakery and pick up a King Cake!

For my money, Julie Anne's makes the best local King Cake. They far surpass the ones you can pick up in a grocery store. Ferrier's Rolling in the Dough makes a great one too, but I'm an impulse buyer, and to get a King Cake from Ferrier's you have to order ahead. At Julie Anne's I can just walk in and pick one up.

The traditional King Cake, for the uninitiated, is much like a sweet roll. But at Julie Anne's you can also get a cream cheese filling, or raspberry, pralines & cream, to name a few. Traditionally, whoever gets the baby in their slice is supposed to bring the King Cake the next year. Doesn't matter around here because I always buy one whether I get the baby or not!

I'm looking forward to our parades this year, too. On Febrary 14 is the Centaur Parade, follo

wed the next day by the Barkus and Meoux Parade on the Riverfront. Steve and I love the "dog and cat" parade, as we call it, though there are many more creatures than dogs and cats. The next weeked is the Krewe of Gemini Parade and then on Sunday will be the Krewe of Highland parade. We LOVE the Highland parade .

The Highland parade is a neighborhood parade but don't let that phrase fool you - it's huge. It's very family friendly and after the parade is a gathering in Columbia Park which goes on into the hours. We always gather more throws at this parade than any other. Steve likes to catch the hot dogs tos

sed out by the Krewe of Bar-b-Que!

The Centaur and Gemini parades follow the same long, snaking route from downtown, down the riverfront, and ending up in my neck of the woods along the bayou. We are about a mile from the parade route at my house, easy walking distance, but from my backyard deck on parade days, I can smell the woodfires and

cookouts in progress hours before the parade comes. We always walk down early in the day and mingle around, and I always run into someone I haven't seen in ages.

I love the fun of Mardi Gras and I just shake my head every year wondering why in the world we stand out in the freezing cold (sometimes), suffer bodily injuries (sometimes) , battle through crowds (often), and scream our lungs out (always) to get a bunch of brightly colored plastic beads made in China. Because it's fun! I'm ready!
Posted by Pat Austin Becker at 9:57 AM

I like the Mardi Gras parades, because I love watching Pat enjoy them. I like the Highland Parade more, because it's family oriented, and you don't have to worry about the drunks.

What I hate to see at the two bigger parades are the drunks fighting the little kids to get the throws. It sort of reminds me of nasty old seagulls swooping down and pecking at and chasing away the littler shorebirds to get what the waves just brought in.

Last year, I can't remember if it was the Centaur of the Gemini Parade, there was a bratty little jock of a kid who was probably 8 years old. He made the bead catching thing a competition with his little sister who was probably 5 or 6.

The kid kept running around and bragging to his dad about how many bead and other things he caught as compared to sister.

One of my pet peeves is snotty little jocks, so I made it my mission to fix his little red wagon. Every time I caught some beads, I turned around and placed it around the little girls neck. The boy was too busy trying to beat his sister, he never paid attention.

At the end of the parade, the girl had almost half her weight of bead around her neck, which was way more than what the boy had. The look on his face was priceless.

i want some king cake!

Sheryl, I must warn you about a custom that surrounds king cake. A little plastic baby is hidden in the cake, and whoever gets the baby in their piece of cake has to buy the next king cake.

The king cake I like is the one with cream cheese in it. The other type, to me, is too dry. I guess the closest thing I can think of that comes close to some king cakes are bear claws. But the ones from Julieannes are pretty good, along with the cream filled chocolate eclaires, the cream puffs, etc.... Pour a cup of hot, strong, black coffee, you got a treat, or an unhealthy breakfast.

are we going to have Check march in the pet parade?

I am a member of Minden's Krewe des Ambassadeurs. My favorite parade to throw is Highland. Gemini is just too long. We are throwing for 4 hours and I'm too damn old for that!!! I'm riding in both of them though!

Okay Sandy I'm going to watch for you in the Highland parade! I'll try in the Gemini one, too, but that one is always SOOOOOOOOO crowded! I'll yell at ya! :)