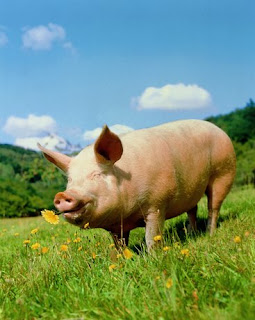 Much has been written about the "Porkulus" bill (I just can't call it a "stimulus" bill) but the more I read about it the more incredulous I get. A couple of days ago I posted a link to the San Francisco Chronicle which listed some of the more extreme pork projects in the bill. This "crap sandwich" as Michelle Malkin refers to it, is still undergoing revision and alteration - for example, Nancy Pelosi was told to remove the contraception-as-stimulus portion. Other things have been scrapped and added but nothing approaching a reasonable bill is on the table at this time. The Senate will get the package next week.

The problem with the bill is that many of the things included are not "stimulus." The Pelosi-Reid Democrats have taken what COULD have been a stimulus package and tacked on many Democratic pet projects such as $2.1 billion for Head Start. This might be a worthy expenditure but it is disingenuous to consider it a stimulus for the economy. How is $150 million to remodel the Smithsonian a stimulus? I guess it provides jobs for the few contractors that get the lucky bids for the project. $600 million for new cars for government workers? The taxpayers have to fund this now? And this stimulates the economy by....??? Oh wait, didn't we already give the automakers a bailout? Or is this part of that?

$100 million to reduce lead-based paint hazards for children in low-income housing? How about the $2.4 billion for projects demonstrating carbon caputure technology? $800 million for AMTRAK?

How about stimulating the economy by increasing welfare? $20 billion for increased food stamps. There are several expenditures under that umbrella, including more money for AmeriCorps and the Low Income Energy Assistance program.

There is also more money for digital TV coupons ($650 million) and I'm still trying to figure out why it is the government's job to be sure I can watch TV.

Kimberly Strassel, writing in the Wall Street Journal, explains the stealthy moves in the Porkulus bill toward universal health care. The bill dramatically expands the number of people who will qualify for Medicaid, a program that was already struggling to stay afloat:

No income test? This means millionaires and bank executives that got laid off will qualify. As if the system wasn't already in trouble. It gets worse:

The "stimulus" also hijacks Cobra, a program that lets the unemployed retain access to their former company health benefits -- usually for about 18 months. The new stimulus permits any former employee over the age of 55 to keep using Cobra right up until they qualify for Medicare at age 65. And here's the kicker: Whereas employees were previously responsible for paying their health premiums while on Cobra, now the feds will pay 65%. CBO estimates? Seven million Americans will have the feds mostly pay their insurance bills in 2009.

This is just scary. Don't even get me started on the Democratic pay-back to ACORN that's embedded in there. It's criminal. Or should be.

So for the record, I'm not opposed to the "Stimulus" bill because it's the Democrats bill. I'm opposed to it because it is massive government spending on things that will NOT stimulate the economy and on things that will increase dependence on government. The House Democrats included little or none of the Republican amendments ("We won the election!") and cut out many of the tax cut recommendations the Republicans put forward.

I stand in hopes that Senate Republicans will hold the line as the House Republicans have and continue to work toward making this bill something that is good for the American people and actually stimulating for the economy.

Updated: Investors Business Daily has an insightful take on the provision that requires only American steel in the infrastructure projects.

Email ThisBlogThis!Share to TwitterShare to FacebookShare to Pinterest
Labels: politics, Read The Stimulus

what are some things that are not covered in the package at this time that think you'd like to see added that you believe would be a stimulus and quick enough to suit you?

that's all you've got?

What would work would be cutting income tax rates on individuals and businesses which would make both more productive.

Right now the priorities are wrong in this bill.

The waste I see are the duplication of several governmental agencies that were established to do the same thing.
Look at the agencies, see which one is doing the best job, cut out the ones that aren't and fund the ones that are.

The former governmental employee had to take a wage/salary cut in some cases. But the system worked.
So, why not cut the goverment employee, hire civilian contractors to do those jobs with greater productivity and less cost.

And the answer is. It won't happen, because without the people depending on the federal government, the politicians are at risk of losing their power.

What sickens me more about a powerful central (federal) government is that it takes away the power from the state and local levels. How in the world does some idiotic congressman (or woman like Nancy Pelosi) from California or any other state know what is best for Wamsutter, Wyoming?

And why in hell should some poor sheep herder from Wamsutter pay through the nose in taxes so that the government can fund something like a Head Start program in Chicago or STD research.