Saturday in the Neighborhood 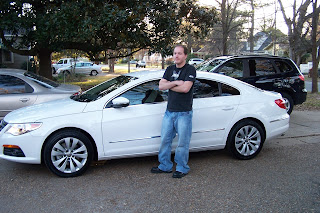 It was a beautiful day today in Shreveport! Clear blue sky and a nice warm day! I really needed to do some yard work but I didn't; instead I headed over to my mom's and got her outside. We sat on her porch in the sun for an hour or so while I cooked a roast for her. We talked catty about the neighbors and had a nice afternoon.

This evening Steve and I are grilling ribeyes and laying low. He's fighting a crazy headache and I'm working on about four hours sleep - not nearly enough for me.

After I got home from mom's, my neighbor came over and knocked on my door; Eric said, "Come look at my new car!" He was beaming with the pride that only your very own first new car can provide! It's a Volkswagon CC. Eric is the son of my dear neighbors, Donny and Gena; he's ... 24? Maybe? I'm not sure. 23? Eric, how old are you?! Anyway, Eric has been driving one of those "well at least it'

s paid for" kind of cars for a few years now, and this is his first brand new car. And it's a beauty! Looks fast just sitting still! HUGE trunk - HUGE! Kickin' stereo! With XM radio! I'm thrilled for him! But I think his dad might be asking to borrow it from time to time - I think Donny is jealous! "Uh, Eric! Can I have the keys?!"

We all stood out in the driveway and admired the car for a while (had to get the book out to find out how to open the hood; and did you know these new cars don't come with "keys" but with - gadget-looking-things instead?) then Eric took charge of his new wheels and zoomed off to the Mudbugs hocke

We have no Super Bowl plans tomorrow. I bought football squares at work and unless fives, eights, and twos are good numbers, I'm not expecting to win. I will make hot wings and guacamole though and we will watch the commercials! I don't really care who wins. Unless they score a five, eight or two.
Posted by Pat Austin Becker at 5:47 PM

what kind of car is that? Gena looks sooooo pretty!

Donny says it's a Volkswagon CC. It's gorgeous inside - black 'n tan!

i am a big football fan. i love the super bowl! actually i didn't know who was playing until we left walmart last night and the greeter at the exit wished us a happy super bowl, then shouted "go pittsburg!" i found out the other team this morning when i read the paper.

a big picture of kurt warner was on the front page of the sports section. when i saw that he plays for arizona, i told emory i was cheering for arizona. i really admire kurt warner. he's from iowa and played for the iowa barnstormers. i've read articles about kurt over the years and love his character!

there are articles about kurt warner in today's sports page and the iowa section. on friday, he and his wife were dining at the cheesecake factory in tampa. their family tradition is to pay for another table's meal when they dine out. friday they paid for a table of 20 pittsburg fans. i thought that was cool!

we are invited to the neighbor's for a super bowl party. we are taking buggy bits and cream puff and i'll enjoy the commercials, food and company. i will probably watch some of the game now that i am cheering for arizona. we also have a sack of items for the food pantry because lamoni is having a super bowl stock the food pantry competition. hy vee will match the items from whoever's party has the most food for the food pantry.

I really don't care who wins, but in a way I'm pulling for Arizona due to the Kurt Warner angle. After all, he's a fellow Iowan.
I've also read articles about Kurt's character. I think he's a class act.

I really don't care who wins, but in a way I'm pulling for Arizona due to the Kurt Warner angle. After all, he's a fellow Iowan.
I've also read articles about Kurt's character. I think he's a class act.