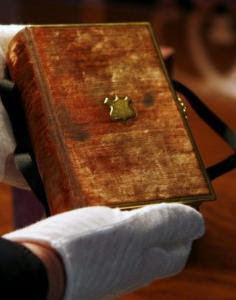 Update: Mr. Obama HAS REQUESTED the words "so help me God" be added to his oath. Hooray!

It should come as no surprise that California atheist Michael Newdow has filed suit to keep Chief Justice John Roberts Jr. from using the words "so help me God" in the inaugural oath on January 20. He says it would be fine if Obama inserted the words on his own, as many suggest George Washington did, but for Roberts to prompt him to do so would be a violation of the First Amendment as well as the Religious Freedom Restoration Act.

The complaint also states, "It is well known that defendant Roberts is a Catholic" and adds that Rev. Rick Warren, whom Obama has chosen for the invocation, has repeatedly said he would never vote for an atheist. Inclusion of an invocation and a benediction in the program, Newdow adds, is "completely exclusionary, showing absolute disrespect to plaintiffs and others of similar religious views."

The suit claims that atheists will feel excluded and stigmitized if they are forced to watch promotion of religious interests.

Newdow even speaks out against the use of the Bible in the swearing in ceremony. He is not actually suing Obama himself though because he says Obama has free choice. But again, for a "state actor" like Roberts, to insert the words, or prompt Obama to use them, is wrong.

According in Intrade, it's a 50-50 chance right now that Obama won't use the phrase. What do you think?
Posted by Pat Austin Becker at 1:01 PM

That's the thing I hate most about stuff like that. Anybody can say ANYTHING they want and nobody will be there to repremand them, but the second someone uses the word "God" it becomes a situation.

The entire speech by Obama will be prompted, but only four words of the ENTIRE speech are being questioned? Just the FOUR LITTLE WORDS are considered as taking away the right to freedom of speech? What about the rest of the speech? If "so help me God" is taken out because "Obama was prompted to say it" does that give him the right to (if and when he makes a mistake in his presidency) say "Oh well, I didn't really MEAN what I said on Jan. 20th. I was prompted to say it. It was against my freedom of speech."

So, does that mean that in any prompted speech we're given, we're able to just go "Nope. It's my freedom of speech." When I get married I'll just say "Eh, I'll stay with you in health. Sickness, not so much."

Another thing, (this goes with anything that says "God" on it) it does not say ANYWHERE that it is the Christian God. There are Gods for every religion, numbnuts. Even Agnostics believe in a god. THAT'S WHAT GETS ME SO RILED UP ABOUT IDIOTS LIKE NEDOW!!!! Atheists have EVERY right (All men were created equal, asshole) just like every CHRISTIAN, JEW, BUDDHIST, etc. to worship whatever they want to worship in America because WE HAVE FREEDOM OF RELIGION

How dare he take 4 words so freaking literally. And Obama would be a hypocrite after all of these Muslim rumors to take out "God" because some idiot doesn't realize that it's not necessarily the Christian God they're talking about.

This may seem like I giant ramble but reading your blog really made my blood boil. I just really needed to say something lol.

Enjoyed reading your blog. Thanks for following me on Twitter, I may not have stumbled upon your blog otherwise. I grew up in Shreveport so I was interested and came here!

i bet he says it. i hope he says it - just b/c i agree a lot with Josh' words

Hey Karen - glad you stopped by! Thanks for the comments.

Dang Josh, slow down and catch your breath.

I want you to know I'm very proud of you. You're speech sounds very familiar. I wonder why.