Will Jindal Take Over as Head of RNC? 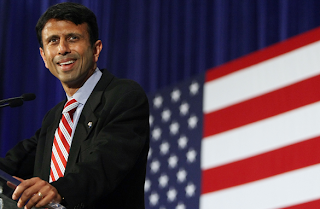 Local radio personality Moon Griffon is predicting that Governor Bobby Jindal will replace Michael Steele as head of the RNC next January.  This suggestion stunned me, because it's so obviously the wrong move, but in politics I guess you never know.

Others have suggested that it would be a better plan for Jindal to run for Mary Landrieu's Senate seat when she comes up for re-election in 2014.  This would put Jindal in position for a VP slot or even a presidential bid in 2016.  He's already served in the U.S. House before becoming Governor of Louisiana.

Part of the political machinations at work involve the Louisiana Lt. Governor's race which will be determined in a special election on October 2.  The position had belonged to Mitch Landrieu who recently was elected Mayor of New Orleans.  Candidates running in the special election include Sammy Kershaw (R), Secretary of State Jay Dardenne (R), St. Tammany Parish President Kevin Davis (R), political newcomer Melanie McKnight (R) of Baton Rouge and state GOP Chairman Roger Villere.  There are three Democratic candidates but none have much name recognition; the most likely of those would be State Senator Butch Gautreaux from Morgan City.

The Hayride has done an excellent analysis of the Lt. Governor's race here and is predicting a Dardenne win.  The problem most conservatives will have with that is that while listed as a Republican, Dardenne is not very conservative and has a record from his time in the State Senate as a big spender; in addition he voted for tax-payer funded abortions. It is predicted that Roger Villere will get "the Tea Party vote."

The candidates will have to run again in 2011 for a new four year term.  The kink in the line is that this position is first in line to assume governorship should the current governor step down.

If Jindal stepped down to say, take over the RNC, or to run for president, or whatever other whim suits him, the Lt. Governor would take his spot.  Currently, Jindal is up for re-election as governor in 2011 and he still insists that is the only job he wants.  If Dardenne wins as Lt. Governor, and Jindal does in fact move on, Jindal would essentially be leaving the state in the hands of a liberal RINO.

Hotline on Call has done a round-up of who they see as potential RNC leaders come January.  Jindal is nowhere on it.

Griffon and pundits like C.B. Forgotston suggest that Jindal will "bail" before he has to deal with the state's financial woes.  That may be.  But as head of RNC?  I just don't see that as the right direction for him.  I can't see him doing it.

I'm probably wrong.
Posted by Pat Austin Becker at 10:40 AM

C. B. might be right about the 'bailing' part. I wouldn't think this would be the smartest move for Jindal either.
On the other hand, it would be national exposure like he's never had, and he's had a lot.
If offered, he'll probably take it.

Jindal is a RINO. He is exactly what we do not need in politics. We need to find true conservatives.

Alas, days like these make my heart pine for Ronald Reagan.

Pat, I don't think Bobby will go that way. Here is my thinking.

Name for me every Chairman of the RNC that you can off the top of your head.

Honestly, when I thought about it, I could only think of two. One is our Governor to the East. The other is a washed up Governor from Montana, that moved NO further in politics after his stint as RNC Chairman.

That job is not one that a "climber" like Jindal can really make use of...unless he wants to settle in to a cushy corporate job somewhere.

No...if Bobby wants to climb politically, that job is poison. (Just ask Steele...of course, his problems are of his own making, but it is an awful position for a "climber.") Go Wiki the RNC Chairmen. Sure, GHW Bush held the post. But, he is the true exception to the rule. That job is not a stepping stone to upward political mobility. There are some big names on there...but most of them ended up working as lawyers, lobbyists, or stuck forever in their current level of political power.

I don't think he'll take it, even if it's offered. I could be wrong. I usually am.

The document that Moon circulates was full of distortions and lies when it was written in 2006 by paid opposition to Jay's campaign, and those lies and distortions remain unchanged.

It's sad that as the state GOP continues to gain prominence, some among its leadership feel the need to attack the best of its own instead of focusing their attention against true liberals.

Jindal doesn't care about finishing a job, he never has. He is the epitome of an opportunist polititian. He talks transparency for everyone but him! Power corrupts and more power absolutly corrupts.

Shameful phoney is all he is!