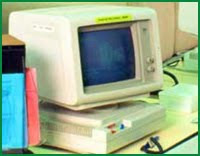 When all else fails and you can't blame Bush for EVERYTHING, just blame the government computers. That's what Peter Orszag did yesterday. As reported by The Hill:

The public is getting a bad return on its tax dollars because government workers are operating with outdated technologies, Orszag said in a statement that kicked off a summit between Obama and dozens of corporate CEOs.

“Twenty years ago, people who came to work in the federal government had better technology at work than at home,” said Orszag, director of the Office of Management and Budget. “Now that’s no longer the case.

“The American people deserve better service from their government, and better return for their tax dollars.”

I won't quibble with him on the issue of American people deserving "better service from their government" but I'm not convinced the issue is "outdated technologies."

It's what we used to call "operator error."

Either way, Mark Tapscott did a little research and found this:

Go to USASpending.gov and click on the "Spending" tab, then from the drop-down menu that appears, click on "Contracts." Then in the search box, enter the word "Computer" with or without the quotation marks.

The first time I entered it without the quotation marks and got back a list of 447 companies having the word "Computer" in their names and that have contracts to sell to the federal government in 2009. Total value of those contracts is more than $46 billion.

That's right, $46 B-I-L-L-I-O-N. So, if OMB Director Orzag is right, Uncle Sam spent $46 billion with computer companies last year but couldn't drag itself into the 21st century of office technology?

Not just that, but the government spent nearly $62 billion in 2008 and $91 billion in 2007. And we're STILL outdated? It sounds to me like someone isn't spending their money wisely.

(More at Memeorandum)
Posted by Pat Austin Becker at 6:11 AM

The feds update their tech packages frequently, whether it's needed or not. Honestly, if they weren't in bed with Microsoft, I wish they would just purchase 500K MacBooks that would last for ten years and call it good.

I remember during the '08 election all the Obamabots were going on and on about how technologically superior Obama was compared to McCain.

Besides, I've been told many times that computer problems is mainly due to operator error.

Bush was too stupid to even use a computer! G.R. needs to learn to respect the current president.