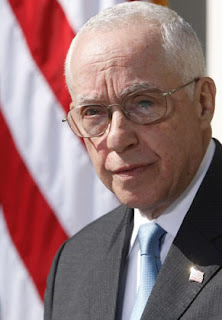 Michael Mukasey's OpEd in the Wall Street Journal is top notch reading today. Mukasey, a former Attorney General, laments the knowledge we let slip through our fingers by not designating Abdulmutallab an enemy combatant right out of the gate. What kind of intelligence has been lost, he wonders.

Certainly, Mukasey contends, he "was certainly aware of who had prepared the potentially deadly mix that was sewn in his underwear, who had trained him, where the training had taken place, whether there was in fact a South Asian man described by two other passengers who helped him talk his way on to the plane, and a good deal more. Such facts are valuable but evanescent intelligence. The location of people—and with it our ability to find and neutralize them—is subject to rapid change."

So, designating him an enemy combatant now, should Team Obama choose to do so, and they've given no indication that they will, wouldn't really matter all that much. Much of what he could tell us is already compromised. But, there is plenty he could still reveal and, as noted before, he has lawyered up. Despite Team Obama's assertion that we have "obtained actionable intelligence" from Abdulmutallab, there is still much more we could have learned.

In assessing the actions of the executive branch, Mukasey concludes with this damning statement:

There is much to worry about if they think that the principal challenge of the day is detecting bombs at the airport rather than actively searching out, finding and neutralizing terrorists before they get there.

But that's what you get when you approach the war on terror with a civilian criminal justice approach.

Abdulmutallab should have been charged as an enemy combatant for attempting to blow up nearly 300 American citizens on an airplane on American soil. No doubt about it.

There is a bizarre quality to the flurry of reviews and reports underway, as administration advisors scurry to figure out how to connect dots and not miss the next bomber. Might they start by getting the maximum information out of the terrorist that chatted for a bit to the FBI and then (with lawyer in hand) decided that discretion was the better course?

If Mukasey is right, and I think he is, don’t expect the administration to revisit its own flawed decision making. If a shift in the disposition of terrorists is going to happen (at least so long as Obama occupies the Oval Office) it will likely need to come at the behest of Congress, which can, of course, pass legislation, deny or grant funding, and assert its authority to control the jurisdiction of the federal courts. If Obama won’t do his job, it is time then for lawmakers to do theirs.

Does anybody have much hope that Congress will actually step up?
Posted by Pat Austin Becker at 8:26 AM

The answer is,"waterboarding, profiling, and keeping Gitmo open"
(Carnac the Great opens the envelope)The question is, What are three things that could be implemented now to prevent future bombings of airplanes.

An even better answer is removing the CIA and letting the military be on the spot judge, jury, and executioner of these fine fellows.