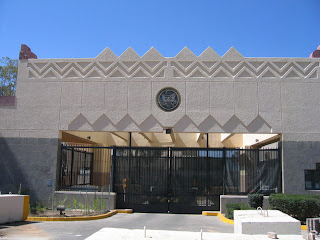 I'm not exactly sure how security forces lose track of six trucks of weapons and explosives, but they've managed to do just that in Yemen which prompted the closure of several embassies, including ours, yesterday:

The closure of three embassies in Yemen was prompted by local security forces losing track of six trucks full of arms and explosives, say reports from Yemen.

France announced its mission in the capital Sanaa was shut on Monday, a day after the US and UK closed theirs.

It follows threats from an al-Qaeda wing linked to an alleged plot to blow up a transatlantic plane over the US.

On Monday, France shut its Yemen embassy, Japan suspended its consular service in Sanaa, and Spain restricted public access to its mission there.

It comes after six trucks full of weapons and explosives entered the capital, and the security forces lost track of the vehicles, according to Yemeni media.

Meanwhile, John Brennan continues to insist we will return terroists to Yemen and at the same time work plea bargains with the Panty-Bomber. If they can't keep up with six weapons loaded trucks, how will they keep up with returned jihadists?

Posted by Pat Austin Becker at 9:48 AM

Maybe the missing person at Newark Airport knows where the trucks are?