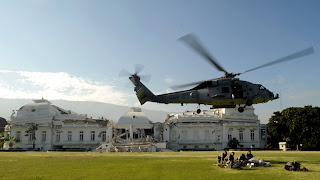 The New York Times reports today that U.S. military flights to evacuate Haitians who need urgent medical care have been stopped. Most of those flights were taking patients to hospitals in Florida for care which have quickly become saturated and overwhelmed. Governor Charlie Crist, in a letter to Kathleen Sebelius, has asked the federal government for financial help in providing that care.

One can't blame Crist here. Florida cannot be expected to cover the cost for this care all alone.

One hospital, for example, has treated 117 patients, and they have established the "Haiti’s Children Fund to cover the costs of treating pediatric earthquake victims," reports The Times.

While the federal government is "reviewing Mr. Crist’s request for financial assistance" more and more Haitians will die waiting on the compassionate care of American hospitals.

One would hope that Obama would take control and initiate the National Disaster Medical System which could pay for the care of those injured people. The Times points out that some of those injured are American citizens. Some of them injured would qualify for Medicaid and some have insurance:

Some of the patients being airlifted from Haiti are American citizens and some are insured or eligible for insurance. But Haitians who are not legal residents of the United States can qualify for Medicaid only if they are given so-called humanitarian parole — in which someone is allowed into the United States temporarily because of an emergency — by United States Citizenship and Immigration Services.

We should hope that those same Democrats (and others) who were quick to blame Bush for the disaster in New Orleans would encourage Obama to take action in this case. New Orleans is an American city and thus the red tape easier to negotiate, however the options are still fairly clear here.

But, if the Obama administration isn't hip on covering the 9/11 health bill, why would they bother with Haiti?

The White House said Sunday it would resume a United States military airlift of Haitians seriously injured in the earthquake — some with devastating burns, head and spinal chord trauma, amputations and other wounds — to American hospitals. The humanitarian effort was suspended five days ago following complaints from the state of Florida that its hospitals were overwhelmed.

“Having received assurances that additional capacity exists both here and among our international partners, we determined that we can resume these critical flights,” Tommy Vietor, a White House spokesman, said in a statement.
Posted by Pat Austin Becker at 12:17 PM