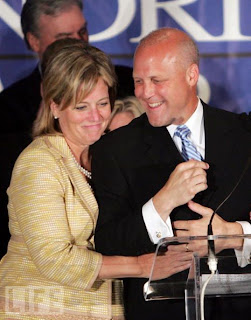 In a venture to the weird, Republican political strategist Mary Matalin is on tap to host a fund raiser for Democrat Mitch Landrieu in his bid for the New Orleans mayoral slot.

NOLA reports that Matalin is slated to co-host an upcoming $1,000-a-person fundraiser in Washington for current Lt. Gov Mitch Landrieu, brother of Senator Mary Landrieu. Matalin says she is supporting Landrieu because of his common sense on issues and his leadership ability; she says it has nothing to do with party.

The New Orleans mayoral race is turning out to be rather interesting; just last weekend one of the top contenders for a run-off slot, Ed Murray, dropped out of the race citing fundraising issues. Murray said that once Landrieu entered the race in December, his fundraising slowed tremendously. 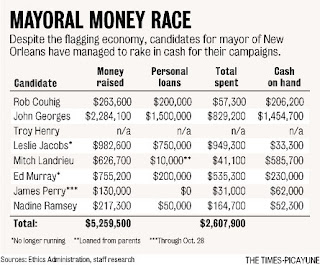 port toward Mitch Landrieu as part of his sister Mary's Louisiana-Purchase-Obamacare vote.

On that front, there has been talk of a recall effort getting underway for Mary Landrieu, and that seems to have hit a snag. Clifford, author of the Red Stick Rant blog, writes:

I'm sorry to say that any recall attempt against Mary Landreiu, like the one against Joseph Cao last spring, will go nowhere.

See this opinion (09-0015) by the Louisiana State Attorney General's Office concerning the recall of a Federal Official.

Even if a recall petition is presented, the Secretary of State's office told me yesterday that they will abide by the AG's opinion.

Because our organization has seen a lot of member interest in a recall, we researched the issue, including consulting with an attorney, and found that the Law and Court rulings - including Supreme Court rulings - do not support the arguments and conclusions made in the by the moveonmary.org website concerning the legality of a recall.

It appears the consistent legal understanding, since Ratification, is that the relevant Article I provisions of the Constitution alone set the qualifications and limitations of Senators and Representatives, and that States cannot further qualify or limit the same. It is, to steal a well used phrase of late, settled Law.

With respect to introducing a recall via the Tenth Amendment, the Supreme Court has ruled, in U.S. Term Limits, Inc. v. Thornton, 514 U. S. 779 (1995) and Cook v. Gralike, 531 U.S. 510 (2001), that the Tenth Amendment does not reserve to the individual states the power to place qualifications on their Senators and Representatives, since that power was already specifically delegated to the Congress in Article I. So again, there is settled Law.

At any rate, by the time such a petition wound its way through the system and up through the courts it would likely be re-election time for Katrina Mary. She's pretty confident of getting re-elected. Caught Him With a Corndog reports that the Moveonmary.org folks aren't backing down.

Meanwhile, her brother Mitch looks well on his way to securing a run-off spot for New Orleans next mayor; could the U.S. Senate be far behind for him?

Mary Landreau had a little scam
to her 300 million did flow.
Every where that Mary went
her finances seemed to grow.
She took a bribe in the Senate one day
which should be against the rules.
It made the liberals laugh and play,
because most them are tools.