Is The Bus Warming Up for Holder? 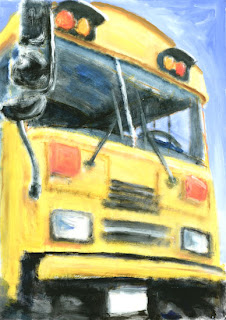 Is the bus coming for Eric Holder? I can't imagine the pressure he must be feeling these days. One botched move after another and he continues to make his boss look bad, who, truth be told, doesn't really need any help.

Today on Fox News Sunday, Senator Lamar Alexander suggested it might be time for Holder to step down:

"Perhaps he should step down," Alexander said on Sunday morning.

"(Holder's) doing a better job of interrogating CIA employees than he is of interrogating terrorists, and he's not making a distinction between enemy combatants and terrorists flying into Detroit trying to blow up planes and American citizens who are committing a crime. He needs to go to Congress and say I made that decision, and here's why. And based on that perhaps he should step down," Alexander explained.

The list of grievances against Holder continues to grow. He's had a deplorable record thus far and his boss just can't be happy. It was clear things weren't going to go well back in September when he dismissed the default judgment in the Black Panther case.

Even before that, in August, Holder announced his investigation into an already investigated CIA regarding interrogations and don't forget the controversial release of the torture memos in April.

No, Holder has made lots of damaging decisions in his first year as AG.

Then came the decision to hold a civilian trial, in New York City!, for KSM which has now been almost unanimously beat down by the New York delegation and the American people. Dana Perino and Bill Burck have an interesting look at how Holder can save face on that call.

And on top of all that, the Abdulmutallab interrogation, or should I say, interview. He wasn't really interrogated. I mean, fifty minutes? Really?

And after fifty minutes he is charged as a common criminal rather than an enemy combatant and turned over to the military who could obtain fresh, actionable intelligence from him.

Jennifer Rubin points to this comment from Robert Gibbs this morning:

White House press secretary Robert Gibbs declined several opportunities on Sunday to say whether Khalid Sheikh Mohammed would be tried in a federal or military court. “He will be brought to justice, and he will likely be executed for the heinous crimes he has committed,” Gibbs said on CNN's "State of the Union." “That you can be sure of.” But he dodged repeated questions by CNN host John King about whether the administration might shift the venue back from federal court in New York to a military court, finally saying that “The attorney general believes the best place to try him is in an American courtroom,” but not committing to that option.

"The attorney general believes..." As Rubin says, not exactly "the buck stops here" meme. It's all Holder's fault. The bus is warming up.

Obama has given folks their walking papers for a lot less.

As the 2010 elections creep closer, many are watching to see if Obama will creep to the center just a bit. I don't believe he will. But stranger things have happened. At any rate, rest assured that national security will be a key issue in the campaigns to come and Holder is a weak link on that front.

I, for one, don't believe any of Holder's decisions regarding KSM or the CIA issues were made unilaterally; I believe something so critical simply had to be made with Obama's input, or Rahm's, at the very least.

This back peddling on the KSM trial has got to make Obama testy, and even worse, if it ends up in Gitmo as a military tribunal, as it should have been in the first place, he's going to be in a tight spot.

My prediction? Obama will throw Holder under the bus, ramp up the Gitmo-tribunal option, and say it was all done in the interest of national security. He'll speak well of Holder, maybe even move him to some other diplomatic position, and act like he's only looking out for you.

I can smell the diesel fuel now.

(More at Memeorandum)
Posted by Pat Austin Becker at 6:59 PM

I hope your nose knows!

One of the most convincing explanations I have heard for the KSM trial backpedal is that Senator Chuck Schumer, one of Obama's most slavish mouthpieces, took one look at the Brown election and realized that he could kiss his Senate seat goodbye if the residents of NYC have to endure that trial, which, in the best-possible-case scenario, will be enormously inconvenient to millions.

Before the Brown upset, Schumer, Mayor Bloomberg, and many others were on record as being fine with the trial. After the upset, they suddenly discovered that they had problems with it.

Obamatons are funny that way.

I'd love to see Holder out on his ear, but I think it's unlikely.

Obama knows that the one demographic he's firmly holding onto are Black Americans. I don't think he'll risk alienating them.

I suppose he could disguise a Holder ouster as a promotion and then throw in another Black American as a replacement AG-- but I just don't see it.

Guess I'm not smellin' the diesel-- but hey, I've been surprised before.

Be still my beating heart.

I think you've called this one.

Quoted from and Linked to at:
Holder That Bus