Is There More to The Louisiana Purchase? 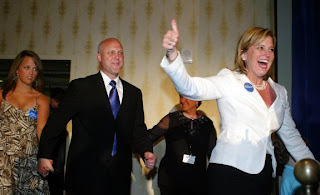 What exactly did Mary Landrieu get for her vote supporting Obamacare? According to Chad Rogers at The Dead Pelican, besides the $300 million payoff she boasted about on the Senate floor, she also secured national Democratic support for her brother Mitch's New Orleans mayoral campaign:

"It is widely known that Landrieu received $300 million in medicaid funding in exchange for her vote to begin debate on the Obama health care proposal. But sources tell The Dead Pelican that Landrieu's vote has also secured support for her brother Mitch in the New Orleans mayor's race, by the National Democratic party."

One of the favorites in that race to win a runoff spot, State Senator Ed Murray (D), surprised his inner circle by pulling out of the race yesterday. His explanation was that he's having trouble raising money. However, NOLA reports that "the most recent official finance reports from the candidates showed Murray had raised the most money, when the sizable amount of his own money he had put into the race was counted."

In addition, NOLA reports that just last week Murray "said he foresaw 'a rough and tumble campaign' with 'a great deal of noise coming from the various campaigns for mayor. I plan to stay out of that noise and discuss with you and your fellow citizens why I should be the next mayor of New Orleans.'

He said he wanted to be mayor 'because this city deserves better' and 'needs leadership for a change.'

Murray has been campaigning for the mayoral seat for over a year while Mitch Landrieu is a late comer to the race; he qualified in early December. This will be his third bid for the seat, a position once held by his father. Landrieu was defeated by Ray Nagin in his last attempt for the office in 2006. Prior to that he was defeated in 1994 by Marc Morial.

Bayou Buzz reports that after Mary Landrieu voted AYE to Obamacare, her poll numbers among Louisiana Republicans and Independents plummeted. Many Independents supported her in her last campaign against John Kennedy. At the same time, her brother Mitch's numbers dropped too.

It's a long time until Mary's re-election campaign, but it's possible that she may not run, or that she anticipates many Louisiana voters will not forgive her support for Obamacare. She will likely lose those Republican and Independent votes that put her in office. It has been suggested that she's helping her brother Mitch on her way out of office by garnering support for his mayoral bid.

Here is Hot Air's Green Room post by Laura summing up the race and how a little mayoral race in New Orleans affects the national scene.
Posted by Pat Austin Becker at 8:03 AM

Word through the grapevine is that a recall motion has been filed and upheld but it's only as good as the people who get off their duffs and make it happen.

Bobby Jindal's silence on the acceptance of that $300 million dollar Medicaid boost is deafening since his very public and some would say "in vogue" rejection of Obama's Stimulus money from the first go round don't you think? Wonder why?

The real battle is how to get organized to collect 900,000 signatures that hold up in the eyes of the state. I worked a recall many years ago, it failed. Ruben is my cousin. I've known him for a long time. All I can say is watch and see.

There is a question too of how much money gets collected, how it is spent, who gets it, etc. What do you think, should I let the public know about Ruben's past?