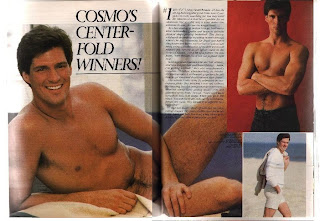 Yesterday was gray and rainy and fit my mood perfectly. My head was gray and rainy as well. Today, bright, sunny and blue skies! I slept until 10:30 which I haven't done in probably 30 years. Part of the reason is that I was up late waiting on my teenager to come in but also because the power blew out about 12:30 and didn't come back on for an hour and a half. This is becoming a regular occurrence; old transformers and what not, I guess.

Anyway, I'm late this weekend with my round-up so let's get on to it. It will be short and quick this weekend as I feel like I've already slept half of the day away! My picture this week is of Scott Brown's Cosmo spread, naturally, since everyone is blogging about Scott Brown this week and I know how much Red likes this picture.

Ann Althouse note this morning that The New York Times will soon start charging for online content. Like her, I link to them often, and I won't link to a site you can't read without paying for it. I understand their point, but I think it's a bad move. They'll lose a lot of readers.

No Sheeples Here is displaying my currently favorite picture.

Fishersville Mike is anxiously awaiting the Scott Brown election! Legal Insurrection has been covering the campaign full time and now Stacy McCain is on the ground, too (I so hate that expression - "on the ground". So sorry.) Reaganite Republican notes the Scott Brown signage. Ruby Slippers is also keeping up with Democratic tactics in the election. Jimmie Bise also notes some Coakley shenanigans.

Bread Upon the Waters wonders who Sam Adams would vote for in the MA election.

Another Black Conservative has photos of SEIU supporting Scott Brown.

Take some time to check in on some of my other favorite blogs. Sandy is hanging in there in Minden, and probably gearing up for Mardi Gras, even though she isn't riding a float this year. Bride of Rove had me entertained this week. She's a beautiful writer and always seems to say what's in my head, but ever so much more eloquently. Michael Yon continues to post first class stuff and pictures to die for. Finally, Sarah has a cat story.

I'm off for a late shower and to get my day started. I feel like I'll be running catch-up all day. Have a wonderful Sunday, y'all!
Posted by Pat Austin Becker at 10:53 AM