Who Dat Owns Who Dat? 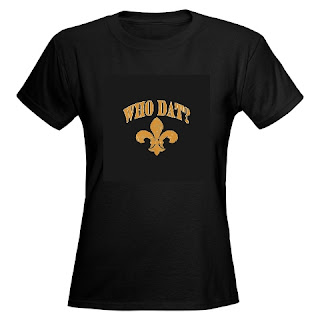 Who Dat says they own the Who Dat copyright? The NFL, that's Who Dat.

And now they might sue me, too, because I'm using it.

In letters sent to at least two retailers, the NFL has demanded that they quit selling items with the Who Dat slogan on it. They claim trademark infringement. NOLA reports:

In letters sent to Fleurty Girl and Storyville, the NFL ordered the retailers to stop selling a host of merchandise that it says violates state and federal trademarks held by the New Orleans Saints.

Among the long list of things the NFL says is off-limits without a licensing agreement are some obvious violations like the official logo of the Saints and the team's name. But the one that stands out is "Who Dat."

Today, Senator David Vitter has responded to NFL Commissioner, Roger Goodell. Vitter explains the history of "Who Dat" as follows:

"Who Dat" was probably first heard in New Orleans minstrel shows well over 130 years ago. Much more recently, but before it was used in connection with the Saints, it was used as a rallying cry by St. Augustine High School in New Orleans. In the 1980s it was adopted by Saints fans in a completely spontaneous way. Only later did any legal persons, including the Saints and the NFL, try to claim it through registration.

Furthermore, Vitter has vowed to print his own t-shirts that say, "Who Dat say we can't print Who Dat?" on them.

Next thing you know we won't be able to say Geaux Saints, either.

I recall hearing Who Dat nearly 20 years ago, when the Saints were the Aints people throughout the years have uttered that phrase time and time again, and the NFL couldn't have cared less.
But now the Saints are a winner, the NFL is taking ownership of the phrase?

If Vitter moves forward with printing he should get Storyville to create them.