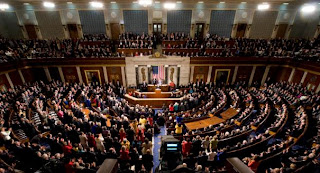 There were a lot of brave souls who watched the State of the Union address last night; I was not one of them. Well, I tried. For a little bit. I got so disgusted by the lies and so turned of by the condescension and so angry at the incessant "blame Bush" meme, that I had to turn it off before it was over.

Instapundit has a wonderful round up of comments and commentary here.

I'm so tired of Obama blaming Bush for what he inherited. Obama chastised Congress for acting like they were on a schoolyard and whining about the other side all the time, but he does the ultimate schoolyard ploy by constantly blaming someone else. Every president inherits something. And as The Anchoress points out, one could say, of course, that Bush inherited al Qaeda from Clinton who did nothing about it. It's time for Obama to quit pointing at Bush and saying "It's your fault!"

My overall take of the portion I saw was of a thin-skinned, defensive, and angry man who believes he is smarter and better than those around him. He was not presidential.

It's all very sad.
Posted by Pat Austin Becker at 5:10 AM

Email ThisBlogThis!Share to TwitterShare to FacebookShare to Pinterest
Labels: Obama, State of the Union

"A thin-skinned, defensive, and angry man who believes he is smarter and better than those around him." BINGO!

You did leave out that he's also an inexperienced guy that's completely perplexed that things aren't working out exactly the way he'd imagined it.

It's come to the point where I can't watch Obama speeches at all. His arrogant demeanor is just too galling. I don't even try anymore.

I'll just read the transcript later today. Better to not the hear the words.

You and I saw the same address. Unfortunately Husband and I did manage to watch the whole thing but then received some welcome respite by the response from Gov. McDonnell.