The Trouble With Yemen... 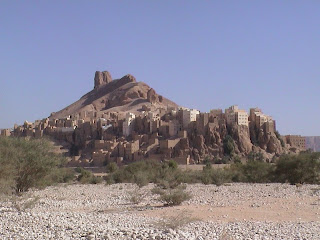 With increased attention on Yemen over the past couple of weeks, there have been a series of interesting pieces about the state of the country.

First take a look at this policy brief (pdf) from the Center for a New American Security. It's dated November 2009 and takes a look at the various problems facing Yemen today:

In the coming decades, Yemen will suffer three negative trends – one economic, one demographic, and one environmental.

Economically, Yemen depends heavily on oil production. Yet analysts predict that its petroleum output, already down from 460,000 barrels a day in 2002 to between 300,000 and 350,000 barrels in 2007 and down 12 percent in 2007 alone, will fall to zero by 2017.1 The government, which receives the vast majority of its revenue from taxes on oil production, has conducted virtually no planning for its post-oil future.

Environmentally, this large population will soon exhaust Yemen’s ground water resources. Given that a full 90 percent of Yemen’s water is used in highly inefficient agricultural projects, this trend portends disaster. This confluence of political, ideological, economic, and environmental forces will render Yemen a fertile ground for the training and recruitment of Islamist militant groups for the foreseeable future.

Several options are offered to help Yemen become a stable functioning state, to include engaging the international community and increasing financial, counterterrorism, and technical assistance, among other suggestions.

As pressure on al-Qaeda has increased in Pakistan and Afghanistan, Yemen has become the most likely place for them to regroup.

As we look at just how to adjust to this scenario, the BBC also has a piece worth noting. Jeremy Brown, writing for the BBC, notes that after the Christmas Day terror attempt, al-Qaeda in Yemen looked at the attempt as a success:

In a swaggering and ambitious statement, they claimed that they sent the Nigerian student onto the plane, and that he only failed because of a technical fault with the bomb.

For them, getting that close counts as the next best thing to a successful mission.

The fractured government and the rugged terrain of Yemen's mountains make it an ideal location for al-Qaeda. The attacks on al-Qaeda in December are reported to likely bring new recruits to the group as rhetoric escalates against Americans and the Yemeni government:

Making deals with tribes that have lost large numbers of women and children in government attacks will be very difficult.

Mr Shaea said that al-Qaeda in Yemen believes that American actions will bring it recruits.

"The United States wants to fight al-Qaeda here. It won't work, they'll make this a new Waziristan, exporting fighters all over the world."

A diverse range of observers, in Yemen and abroad, agree that a heavy-handed counter-terrorism strategy will create more problems than it will solve.

Brown also cites the crushing poverty in Yemen as a problem the country faces. His conclusion is that Yemen isn't yet a failed state, but unless something changes, it will continue to descend into chaos.

Meanwhile, The Washington Post reports that Yemeni officials are publicly playing down the role of a partnership with the United States for fear of backlash:

As the United States ramps up its counterterrorism role here, senior Yemeni officials are publicly playing down the partnership, fearing that the government could pay a heavy political price for aligning with the United States and appearing too weak to control al-Qaeda on its own. The head of Yemen's national security agency declared over the weekend that the threat posed by al-Qaeda had been exaggerated and that Yemen is not a haven for militants, the state news agency Saba reported.

This is an interesting conclusion in light of the fact that several embassies were closed over the weekend out of fear of security concerns, not to mention the missing six trucks of weapons and explosives that ignited those fears.

And let's not forget that those being held in the bombing of the USS Cole mysteriously escaped from a Yemeni prison.

At any rate, it's clear that Yemen is likely the next hotbed of focus for our national security leaders. What is alarming, in a way, is that this White House refuses to accept responsibility for 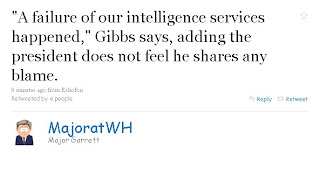 any of what has happened over the last couple of weeks. Major Garrett on Twitter quoted Robert Gibbs as saying "the president doesn't feel as if he shares any blame." It was the intelligence services fault.

Is the best strategy for winning the war on terror for Obama to continue to wage war with our own intelligence services?

The Washington Times has even indicated that possibly Obama has been too focused on his heath care issue to focus properly on national security. I'm not sure I'd go that far - I'd like to think a president could focus on more than one issue at a time. Obama has also been criticized for spending too much time playing golf. Bush received the same criticism.

In the end, we need to take a hard line look at Yemen and what is happening there. Janet Napolitano is not exactly filling me with confidence, either. This is not the time for a pantywaist president or an appeasement strategy. The time for bowing and open hands may be coming to a close.

It's time for a strong leader. Do we have one?
Posted by Pat Austin Becker at 12:24 PM